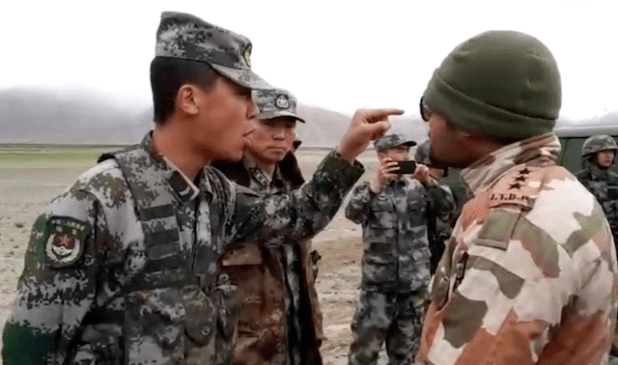 The video, which appears to show a major hand-to-hand combat incident between large groups of Chinese PLA and Indian soldiers, is of unknown date and origin but is being described as the “newest” among circulating border fight videos.

While nearly impossible to verify the precise location or authenticity of the video, it was reposted by Carl Zha, who Western media reports often describe as a Chinese-American Twitter user and “pro-Beijing influencer”.

The video may be months old, and is being circulated on the same day that China and India have each accused the other of firing shots across the LAC. The footage shows sticks and metal rods being used, and possibly the butts of rifles, given some of the soldiers appear to be armed, but no shots are fired in the clip.

Beijing charged India with a “severe military provocation” after it claimed Indian troops breached the LAC and entered the Chinese administered side. The Indian troops then “opened fire to threaten the Chinese border defense patrol officers,” according to the PLA charge on Tuesday.

Other videos showing intense border clashes, such as the one below posted to YouTube in early June, sometimes involve sticks and rocks, and other makeshift weapons.

The initial events of June 15 were what set off current soaring tensions, with both sides lately seeking to deescalate through a series of talks by each’s military high command.

The Indian troops may have actually fallen to their deaths amid the high altitude nighttime melee, though details remain disputed and unclear.