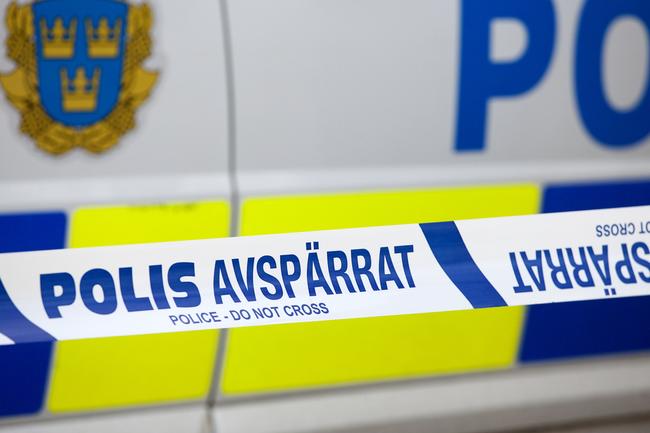 In June, four armed Swedish police officers seized and confiscated the entire stock of the book Det här är en svensk tiger (“This is a Swedish Tiger“), written by Swedish author and standup comedian, Aron Flam. The book tells the story of how Sweden’s claim of neutrality during World War II covered up a reality of Swedish collaboration with the Nazi war effort and the profits that the Social Democratic government made from the war.

The title of the book is a play on the words of a 1941 wartime poster of a tiger drawn in the blue and yellow colors of the Swedish flag with the title “En svensk tiger” (“A Swedish Tiger”) and made by Swedish illustrator Bertil Almqvist. The word “tiger” in Swedish means tiger, but it also means to keep silent. The original poster was part of a Swedish government campaign to warn Swedes to keep silent, presumably not to rattle Sweden’s wartime relationship with Nazi Germany.

Flam satirized Almqvist’s illustration on the cover of his own book by drawing an armband with a swastika on the tiger, and having one of its front legs lifted in the Nazi salute, while winking at the reader. The owner of the copyright of Almqvist’s tiger, however, Sweden’s Military Readiness Museum, alleged that Flam had violated its copyright and reported him to the police — who confiscated the books. According to Flam, now the prosecutor even wants to seize books from readers who already bought them, to make sure the books are destroyed.

The confiscation of books and the upcoming case against Flam has ignited a debate in Sweden about the value of freedom of speech. As Flam has pointed out, a Swedish writer who happens to be Jewish having his books, critical of Swedish-Nazi collaboration during the war, seized by the Swedish state is a bit ironic.

“Just the idea that there is a prosecutor who is seriously pushing to track down and destroy books is Kafkaesque. If they had contented themselves with tearing off the front-page, but no”, Flam said.

As always, how the police and prosecution choose to operate is a matter of priorities; those (curious) priorities were on display in another recent court case about free speech, as well. In it, an elderly Swedish woman was sentenced to a fine for “incitement”, after she expressed her anger on Facebook over the violent assault by a 27-year old man on an 86-year old pensioner.

“Yes, he [the perpetrator] will probably be out [of prison…] right away. It would be better to send him out of the country, what kind of monkey people come into the country, deportation is all that applies now, there are no mitigating circumstances… The monkeys should not come here and commit such crimes…”

The woman did not mention any specific group of people in her Facebook post, yet the court found that she had incited hate against immigrants:

“The district court…finds that the communication cannot be understood in any other way than that it is aimed at such a group of people who are protected by the provision — immigrants – i.e. the ethnic groups in Sweden who have in common that they have a different national origin than the majority population. By calling this group ‘monkeys’ and ‘monkey people’, NN [the woman] has expressed herself in a way that must be considered derogatory.”

The case was not unusual for Sweden. The prosecution of pensioners, and others, for speech crimes is commonplace.

The problem is that Sweden is a country deeply mired in a growing violent crime wave that its authorities have not been able to defeat. While Swedish police and prosecutors give a high priority to the confiscation of books with covers of satirized Swedish tigers and pensioners guilty of “Wrongthink”, they evidently do not have the resources to confront violent crimes.

Recently, SVT Nyheter ran a story about a 13-year-old girl who had been raped in a public toilet in a mall in Uppsala in November last year. Even though the police knew who the suspect was, it took them seven months to arrest him. “Since the police did not have the resources, he was not detained until now”, Moa Blomqvist, the prosecutor in the case, told Swedish Television. “I am very upset that such serious crimes are piled up waiting with the police…” The police deny Blomqvist’s claim.

In July, a mother of three and her sister, who were walking home with their husbands, suffered head injuries when a man, who identified himself to the women as coming from Gottsunda, a “no-go zone” in Uppsala, decided to start kicking them in the head, apparently for no reason. The man was soon joined by a gang, who proceeded to whip the husbands with belts. The police so far have no suspects in the case. Two weeks later, in the center of Uppsala, a man was stabbed multiple times.

Uppsala, once a picturesque and peaceful university town, is now the town in Sweden with the most shootings per capita. “The gangs have been allowed to grow” Manne Gerell, a criminologist at Malmö University told SVT Nyheter in December 2019, adding that the police had “woken up” a little too late.

Yet, in Sweden, in 2019, not even one in ten bombings led to criminal charges, according to SVT Nyheter.

Perhaps it is time for Sweden’s government to spend fewer resources on prosecuting the speech crimes of pensioners and comedians, and more on fighting violent crime.

The Owl House NYCC panel eulogized a brilliant show cut short: ‘We did our best’