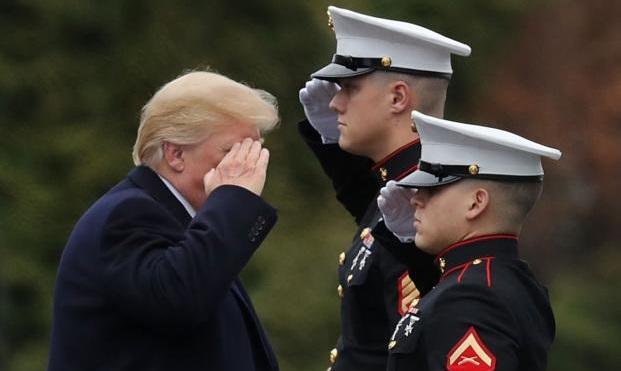 
Breitbart  is out with another exclusive from people who were close to the President when The Atlantic claims he called military veterans “losers” and “suckers.”

This time, US Ambassador to France, Monaco Jamie McCourt, told the outlet that the Atlantic story is bullshit.

Ambassador McCourt was there the day President Trump’s team called off the trip to the cemetery at Belleau Wood because of inclement weather. She is the latest U.S. official who was actually present at the event to publicly deny the Atlantic’s account of events, which is based entirely on anonymous sources. –Breitbart

“Needless to say, I never spoke to the Atlantic, and I can’t imagine who would,” said McCourt. “In my presence, POTUS has NEVER denigrated any member of the U.S. military or anyone in service to our country. And he certainly did not that day, either. Let me add, he was devastated to not be able to go to the cemetery at Belleau Wood. In fact, the next day, he attended and spoke at the ceremony in Suresnes in the pouring rain.“

It’s amazing how fast The Atlantic‘s anonymously-sourced hit-piece is unraveling. Almost as amazing as how questionable it is that a magazine owned by Steve Jobs’ ex wife – a Biden megadonor – would float the claim in the first place.

Speaking with Breitbart News, former Deputy White House Chief of Staff Zach Fuentes suggested that Kelly would never have stood by while Trump disparaged fallen Marines, and that the paper may have conflated comments Trump made the following day.

“You can put me on record denying that I spoke with The Atlantic,” Fuentes said on Monday. “I don’t know who the sources are. I did not hear POTUS call anyone losers when I told him about the weather. Honestly, do you think General Kelly would have stood by and let ANYONE call fallen Marines losers?“

Life experience should tell all of us that if a major part of a story is proven false, the rest of the claims from the same author should be considered garbage, especially with anonymous sources. https://t.co/AK8hldmEsG

Fuentes added that he thinks The Atlantic‘s sources “are unlikely first hand accounts,” adding “They are conflating those people from something the day after.“

Fuentes also told Breitbart News he is upset that Trump has been speaking negatively about Kelly.

“On a separate note, I am disappointed to see POTUS talk about General Kelly so negatively in the middle of being accused of saying negative things about the military,” Fuentes said. “If anyone understands selfless service, it’s General Kelly.”

The fact that Fuentes—Kelly’s closest ally—is now publicly denying the report from The Atlantic is a monstrous strike against the credibility of the report. Several Trump critics, including former National Security Adviser John Bolton, have also denied this happened.

Every person who was allegedly in the room who has spoken up so far has denied the account of what happened. Fuentes’ denial, reported here exclusive on Breitbart News first, deals another strike against The Atlantic’s credibility. –Breitbart News

“I also think any President, regardless of political affiliation, deserves to have candid and private conversations with trusted advisors,” Fuentes continued. “If the President decides to talk about it, that is his right, but generally, I don’t think it is my place to divulge private conversations I’ve had with him.”

In other words – Kelly and his top aide, neither of whom are known for being MAGA types, are supporting the president over The Atlantic.

Meanwhile, Atlantic Editor in Chief Jeffrey Goldberg conceded that they may have gotten part of the story wrong. Read about that here at The Federalist.