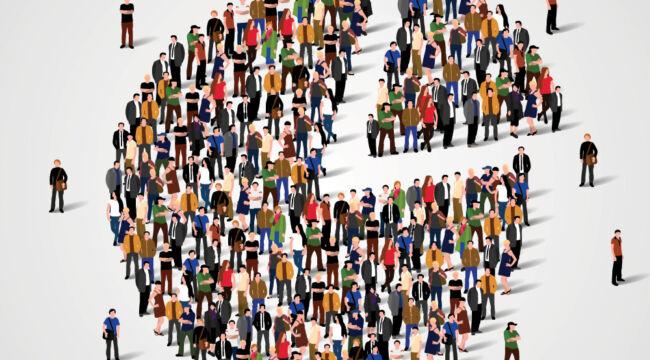 
Authored by Addison Wiggin via The Daily Reckoning,

Demography is destiny, they say.

The early classical economists — Smith, Ricardo, Malthus, Mill, Marshall, and others — were keenly interested in the role that the young and the aged played in building wealth.

Living at a time when birth rates were high and populations were expanding, they wanted to determine how demographic growth changed wages, savings, and output; which classes benefited; and whether a larger population was a long-term blessing.

Two centuries on, Peter Peterson, in his book Gray Dawn, warns that we might pose a different question: What happens to the wealth of nations when the populations get old and begin to shrink?

The Twin Pressures of Population Growth and Diminishing Available Resources

In his book Revolution and Rebellion in the Early Modern World, the historian Jack Andrew Goldstone argues that the great revolutions of Europe — the English and French revolutions — had one thing in common with the great rebellions of Asia that destroyed the Ottoman Empire and dynasties in Japan and China.

All these crises occurred when inflexible political, economic, and social institutions were faced with the twin pressures of population growth and diminishing available resources.

Across Europe in the early 1700s, populations began to increase as mortality rates from disease (such as plague) and famine declined, and birth rates remained high. A large excess of births over deaths during much of the early modern period produced a baby boom.

According to demographer Michael Anderson, the population in Europe doubled in the 100 years between 1750 and 1850. The “age of democratic revolution” in the late 1700s, including the French Revolution, coincided with an expansion in the proportion of young people.

Demographics and the French Revolution

A large, unruly, and youthful rural population was a leading cause of social stress in France prior to and during the Revolution. The population of France grew by 8 to 10 million people in the eighteenth century.

By contrast, in the previous century, the population had only increased by a million. Around 1772, Abbé Terray began the first serious survey of demographics in France. Terray pegged the population at 26 million.

By 1789, the eve of the French Revolution, Louis XVI is thought to have had nearly 30 million subjects in his realm — more than 20% of the entire population of non-Russian Europe.

These numbers, suggests a study published by George Mason University, had to have some effect. Arguably, they changed France both politically and economically. And, we might add, cost Louis his kingdom… and his neck.

Likewise, the Russian population doubled between the 1850s and the beginning of World War I. From 1855 until 1913, the population of the Russian Empire increased from about 73 million to about 168 million.

The stress of feeding and providing shelter for that many people was too great for the existing order. The principal problem in the countryside was shortage of land. Rapid population growth meant that the size of allotments decreased from an average size of just over five hectares in 1861 to less than three in 1900.

In the West, industry absorbed the swelling population, but Russia could only put about one third of its new population on the assembly line. There was a growing feeling that, unless something was done, the countryside would soon explode. The peasants had a simple solution to their problems — confiscate all private lands owned by the landlords.

In a paper presented at the European Population Conference 2001, the Russian historian Lev Protasov suggested that prior to the Russian Revolution, demographic factors played an important role in stirring up the masses.

Curiously, a striking number of the radicals who helped foment the revolution were born in 1880. “The 1880s’ generation,” says Protasov, “made up almost 60% radicals and dominated the left factions: 62% of socialist revolutionaries, 58% of the Bolsheviks, 63% of the ‘national’ socialists and 47% of the Mensheviks. To be sure the powerful showing of young radicals in the early 20th century has been noted by historians.”

“The Russian political cataclysms of 1905 and 1917 were ‘prepared’ not only by economic or political causes,” concludes Protasov, “but by nature acting out its own laws. The demographic bursts in the last decades of the 19th century, not only sharpened modernization problems, but speeded up the marginalization of society and gave abundant ‘human material’ to the first lines of the future revolution makers.”

In his Clash of Civilizations, Samuel Huntington considers demographics to have been a major factor in political revolutions going back to the Protestant Reformation.

“The Protestant Reformation,” writes Huntington, “is an example of one of the outstanding youth movements in history.”

Citing Jack Goldstone, Huntington continues, “a notable expansion of the proportion of youth in Western countries coincides with the Age of Democratic Revolution in the last decades of the 18th century. In the 19th century successful industrialization and emigration reduced the political impact of young populations in European societies. The proportion of youth rose again in the 1920s, however, providing recruits to fascist and other extreme movements. Four decades later the post-World War II baby boom generation made its mark in the demonstrations of the 1960s.”

Population explosions have caused trouble. But now populations are falling. The effect could be equally devastating:

As all developed nations rely on taxes paid by young workers to support aging retirees, a declining and aging population will arrive just when the Western societies need more young people most.

Whereas young people generally exhibit a rebellious and revolutionary influence on society, what happens when people grow old? The exact opposite.

Fearfulness and loss of desire commonly accompany aging. Older people tend not to want as many things in life as young people. They lose their desire to impress friends, relatives, and partners.

Instead of buying items they don’t need, they tend to become fearful that they will not be able to obtain what they do need. There is nothing peculiar about this; it is just nature’s way of recognizing diminishing opportunities.

A man in his forties can start over. But in his late sixties, he no longer has the energy or the desire to do so. He therefore starts saving everything — tinfoil, money, rags — for fear he will not be able to get them when he needs them.

This is how an elderly individual tends to behave. But what does an aging society look like? We need only look across the ocean — to Japan.

They have been fighting a deflationary environment since the early 1990s, with no end in sight.

The rest of the developed world could also be turning Japanese — fighting a deflationary environment with no end in sight.