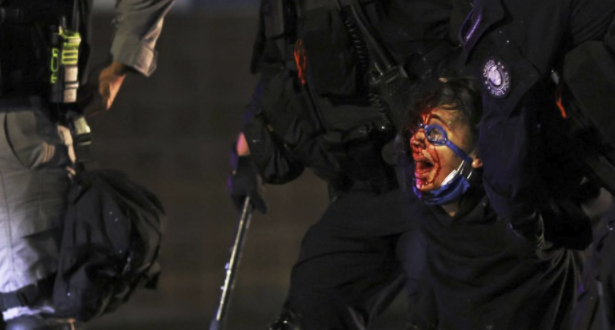 
Portland police made multiple arrests overnight on Friday during what one independent journalist described as a “violent Antifa riot”. Nearly 100 days have passed since the unrest started, and it looks like the seemingly professional class of demonstrators keeping the unrest alive aren’t slowing down at all.

The night after the suspect in a fatal shooting – a suspect who once described himself on camera as “100% Antifa” – was himself gunned down after pulling a gun on the cops who came to arrest him, violent rioters in Portland once again came out to attack federal property.

According to Reuters, police arrested 27 people, mostly on charges of interfering with law enforcement or disorderly conduct. Many were arrested for throwing projectiles at officers.

“Officers began to make targeted arrests and in some cases moved the crowd back and kept them out of the street,” according to a press released issued on Saturday.

Here’s a more in-depth description of the protest from the AP, which said a few hundred demonstrators participated. The demonstrators ultimately tried to target the Portland Police Association building.

A few hundred demonstrators had met at Kenton Park before making their way to the Portland Police Association building, where officers warned protesters to stay off the streets and private property. Those who refused could be subject to citation, arrest, the use of tear gas, crowd-control agents or impact munitions, police said.

Around midnight, police ran down the street, pushing protesters out of the area, knocking people down and arresting those who they say were not following orders — as some people were being detained, they were pinned to the ground and blood could be seen marking the pavement. Law enforcement officers used smoke devices and shot impact munitions and stun grenades while trying to get the crowd to disperse, The Oregonian reported.

The Portland Police Bureau issued a statement Saturday morning, saying some officers reported that rocks, a full beverage can and water bottles had been thrown at them, prompting police to declare the gathering an unlawful assembly.

Police said at one woman who was detained was bleeding from an abrasion on her head, and she was treated by medics at the scene before being transported by an ambulance. The Portland Police Bureau said she jumped out of the ambulance and ran away before it left the scene, however.

Most of those arrested were arrested on suspicion of interfering with a peace officer or disorderly conduct, police said.

But protesters claimed they had a right to keep coming out following the new revelations of the killing of Daniel Prude revealed on Wednesday, while President Trump signed a memo threatening to cut federal funding to “lawless” cities, including Portland, unless they bring the street violence under control.

And Ngo, the faithful chronicler of the unrest sweeping across the US since the killing of George Floyd, shared video of the latest round of protests from last night, including one scene where protesters nearly hit their “comrades” with thrown projectiles as they were being taken into custody.

Portland Police arrest antifa rioters overnight. One of them is crying. Their comrades continue throwing projectiles at police, nearly hitting those being arrested on the ground. #PortlandRiots pic.twitter.com/s2e5k5h7eX

One woman who was arrested at the “violent” protest reportedly escaped from an ambulance.

Based on known details released by @PortlandPolice, this appears to be the woman arrested at the violent antifa protest who escaped from the ambulance overnight. pic.twitter.com/FfCHRbGxix

And for all the ‘blue checks’ who insist on soliciting donations to “bail funds”, here’s where that money is going to.;

Breaking: Kevin Phomma was arrested by Portland Police after he allegedly attacked cops w/bear mace at an #antifa riot. His $33,000 bail was quickly paid.

We imagine they’ll be back again on Saturday, as the cycle of unrest continues and Democratic mayors move to “defy” President Trump over his threat to cut federal funding.

Finally, as we’ve said before, it’s important to remember that the violence we are seeing is in mostly white cities by mostly white people. Minneapolis is 19% black. Seattle is 7% black and Portland is 6% black. Kenosha is 10% black and close to 80% white. Even LA, which has a larger population of blacks, hasn’t seen riots erupt like Portland, even after the city suffered yet another police shooting of a black man.