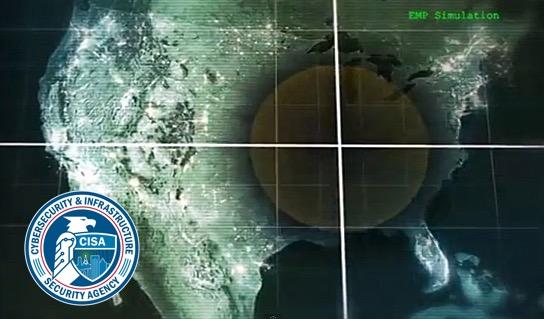 
The U.S. Department of Homeland Security (DHS) released a new report warning about a “potential” electromagnetic pulse (EMP) attack against the U.S.

DHS’s warning published Thur. (Sept. 2), or about 60 days until the U.S. presidential election on Nov. 3, indicates there are “evolving threats against the American homeland, most recently highlighting efforts to combat an Electromagnetic Pulse attack which could disrupt the electrical grid and potentially damage electronics.”

The department released an EMP status report via the Cybersecurity and Infrastructure Security Agency (CISA) that said the “key actions to address known EMP-related vulnerabilities to critical infrastructure.”

CISA said an EMP attack could “disrupt, degrade, and damage technology” embedded in critical infrastructure systems. Widespread blackouts could be seen if an EMP was to damage the nation’s electrical grid, resulting in additional flare-ups of socio-economic turmoil.

“EMP attacks are part of the emerging threats against our nation and demand a response,” said Senior Official Performing the Duties of the Deputy Secretary Ken Cuccinelli.

“That is why DHS is taking these contingencies very seriously, working diligently to mitigate our risks and equipping our state and local partners with the resources they need to do the same. We’ve made significant progress and look forward to work ahead,” Cuccinelli said.

“Over the past year, we have worked with interagency and industry partners to identify the footprint and effects of EMP threats across our National Critical Functions, and are developing sustainable, efficient, and cost-effective approaches to improving the Nation’s resilience to EMPs,” Krebs said.

To combat these emerging threats, President Trump signed an executive order in March 2019, delegating power to the White House for EMP preparedness.

We recently quoted Peter Vincent Pry, ex-chief of staff of the Congressional EMP Commission, who wrote an op-ed that said the virus pandemic from China has “exposed dangerous weaknesses in U.S. planning and preparation for civil defense protection and recovery, and those weaknesses surely have been noticed by our potential enemies: China, Russia, North Korea, Iran, and international terrorists.”

Pry warned that “China has been planning to defeat the U.S. with an EMP and cyber “Pearl Harbor” attack for a quarter-century.”

DHS nor CISA gave any more information on ‘evolving EMP threats’ on the American homeland. There was not mention of whether the threat could be from a solar storm or EMP weapons. However, the EMP status report did mention DHS is currently running EMP pilot tests to assess EMP vulnerability on infrastructure:

“Finally, DHS is partnering with other federal departments and agencies, state, local, tribal, and territorial entities and the private sector to field test a more resilient critical infrastructure. There are a number of field demonstration (or pilot) projects planned and underway by both DHS and DOE to assess EMP vulnerability and then deploy, evaluate, and validate EMP mitigation and protection technologies.

“One such pilot is the San Antonio Electromagnetic Defense Initiative, designed to show how an entire region can become resilient against an EMP. These pilots are multisector, multifunction efforts, seeking to ensure key capabilities continue to function in a post EMP environment and that by maintaining those key functions we can expedite a full recovery. Working with federal interagency partners, DHS will play a major role in ensuring communications systems remain operational and, by ensuring key systems which are protected against EMP, are also protected against other threats such as cyber-attacks.” – EMP status report

“We recognize the threat and we’re working on it and you don’t need to know any more than that, thank you for asking…”