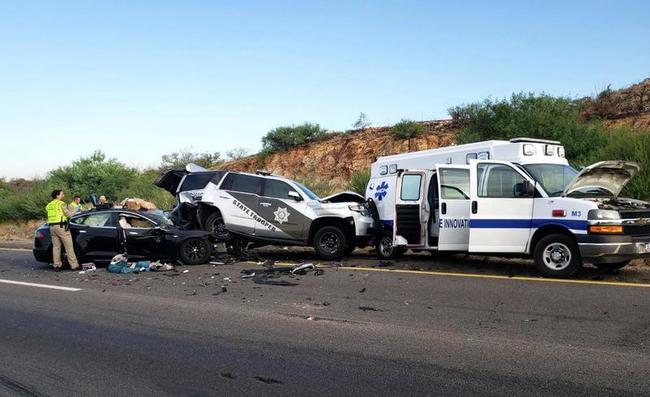 
Tesla’s full self driving (FSD) concept has been at the intersection of a textbook case study in selling vaporware mixed with a poignant statement about the gullibility of Tesla consumers all wrapped up in a commentary about how regulators, both in the world of public securities and highway safety, have become irrelevant.

In short, it’s a product that doesn’t exist.

Tesla has been collecting $8,000 for something called “Full-Self Driving” based on the promise that the car will be able to drive itself, 24/7/365, at some point in the future. But for now, those putting down deposits for the future promises have been left with a series of unimpressive features like Autopilot, which have become an industry standard (i.e. lane assist, parking assist) with other major auto manufacturers.

In some cases, people who were paying for FSD weren’t even getting the hardware they were being promised. And nobody has seemed to notice and/or care.

Consumer Reports released a scathing article on Friday, noting what many of us have been screaming from rooftops for years: “The $8,000 [full self driving] option doesn’t make the car self-driving”. CR says “consumers should be wary” about shelling out the money for a product that doesn’t exist:

The features might be cutting edge, even cool, but we think buyers should be wary of shelling out $8,000 for what electric car company Tesla calls its Full Self-Driving Capability option.

Tesla claims every new vehicle it builds includes all the hardware necessary to be fully autonomous, and the company says that through future over-the-air software updates, its cars should eventually be capable of driving themselves.

But for now, Full Self-Driving Capability, which includes features that can assist the driver with parking, changing lanes on the highway, and even coming to a complete halt at traffic lights and stop signs, remains a misnomer.

“Owners should not rely on Tesla’s driver assistance features to necessarily add safety or to make driving easier, based on Consumer Reports’ extensive testing and experience,” the article warns.

Jake Fisher, senior director of auto testing at Consumer Reports, said: “Despite the name, the Full Self-Driving Capability suite requires significant driver attention to ensure that these developing-technology features don’t introduce new safety risks to the driver, or other vehicles out on the road.”

He continued: “Not only that, in our evaluations we determined that several of the features don’t provide much in the way of real benefits to customers, despite the extremely high purchase price.”

“Sometimes it would recognize a parking space as suitable, and we’d park in it. But when we drove by the same space again later, it was as if the parking spot didn’t exist. It also often didn’t park straight between the parking lines.”

Smart Summon, which allows the car to drive remotely to a location within a private parking lot, would sometimes drive on the wrong side of parking lot driving lanes, and it didn’t always stop at stop signs in the lot.

The article also called Tesla’s “Navigate on Autopilot” inconsistent, stating the system would ignore exist ramps and drive in the carpool lane. Consumer Reports also said control around traffic lights and stop signs was dangerous: “At times, it also drove through stop signs, slammed on the brakes for yield signs even when the merge was clear, and stopped at every exit while going around a traffic circle,” the review read.

William Wallace, manager of safety policy for Consumer Reports, concluded: “Tesla has repeatedly rolled out crude beta features, some of which can put people’s safety at risk and shouldn’t be used anywhere but on a private test track or proving ground.”

We have to ask again: how long is the NHTSA going to allow this? We have documented a litany of accidents involving Tesla’s supposed “Full Self Driving”, the latest of which can be found here. How many more people have to die before regulators take notice?

Consumer Reports says Tesla did not respond when approached for comments and questions.