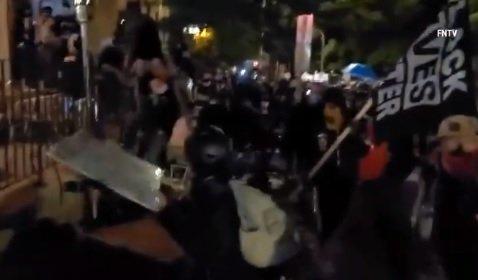 
While mainstream media outlets like the New York Times largely neglected to cover the goings-on in Rochester, New York, last night, independent and local reporters were on the scene to document the chaos as agitator-fueled unrest engulfed yet another small post-industrial American city.

One reporter who was on-hand to document the scene tweeted video of a gang of “peaceful Black Lives Matter activists” barging into a restaurant, terrifying diners, flipping chairs and screaming at people. Apparently, they did this to multiple establishments across town.

#HappeningNow the protesters in Rochester NY are “shutting down restaurants”, tables are broken, people running off scared #rochesterprotests pic.twitter.com/oxmlZp526w

In keeping with what’s become an established pattern, the “protest” started hours before as a mostly peaceful daytime demonstration, with the real hard-core anarchists and criminals congregating in the evening to create chaos while vandalizing businesses and terrorizing people in what’s become a transparent attempt to sow even more of the “divisiveness” that Democrats routinely attribute to President Trump and his “comrades” in Moscow.

One of the gang’s leaders shouted at guests, claiming it was “time to leave” and that they were “shutting the party down”.

“There’s no need to run, nobody is hurting y’all. We’re just shutting the party down,” the obnoxious “protester” shouted as people flipped tables and threw chairs.

Windows were smashed at two Starbucks, five banks and a Duane Reade in Lower Manhattan, causing an estimated $100,000 in damage.

At the scene, police recovered two stun guns, smoke grenades, and tools to aid in “burglary and graffiti”, according to the New York Post.  All those arrested were charged with rioting, while some were hit with weapons charges over the “tools” mentioned above.

The latest wave of unrest is being attributed to the March killing in police custody of Daniel Prude by police in Rochester. The man’s brother called the police after he began behaving erratically, running around in the street naked. He died due to suffocation, which the coroner ruled a homicide, with PCP intoxication listed as an aggravating factor.

The New York Times late Friday published a lengthy story accusing Rochester PD of a “cover up” in the death of Prude, who died back in March, although his family just went public with the claims on Wednesday.