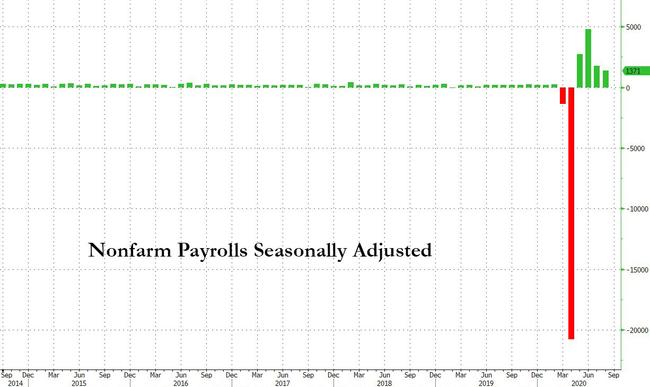 
Amid a wide range of sellside estimates, and a whisper number that was either too high or too low depending on whom you asked, moments ago the BLS reported that in August, the number of payrolls was almost unexpectedly in line with consensus expectations: according to the August jobs report, some 1.371MM payrolls were created, essentially on top of the 1.35MM expected.

This was clearly a good news report, where some had expected a substantial slowdown in August due to a spike in virus cases across Sunbelt states, and U.S. labor-market rebound unambiguously extended for a fourth month in August, giving hope that the economy can continue to recover – and that Trump can parade with a strong labor market in the next two months  – despite Washington’s standoff over further government aid to jobless Americans and small businesses.

The one series tracked by all, the number of “temporarily” unemployed surprised as it dropped by more than 3 million to just 6.2 million, from 9.2 million the month before. As usual, debate over what defines “temporary” unemployment remains in the foreground.

This was offset however by the percentage of the labor force unemployed for more than 15 weeks: this jumped to 5.1%, the highest since the financial crisis.

The average hourly earnings also printed generally in line, rising by 4.7% in August, unchanged from the previous month, and above the 4.5% expected.

Also worth noting is that the average workweek for all employees on private nonfarm payrolls increased by 0.1 hour to 34.6 hours in August. In manufacturing, the workweek rose by 0.3 hour to 40.0 hours, and overtime increased by 0.1 hour to 3.0 hours. The average workweek for production and nonsupervisory employees on private nonfarm payrolls was unchanged at 34.0 hours.

Where there was a surprise was in the unemployment rate, which unexpectedly tumbled from 10.2% in July to 8.4%, smashing expectations of a 9.8% print. It looks like Trump wants to go into the November elections with a 7% or lower unemployment rate.