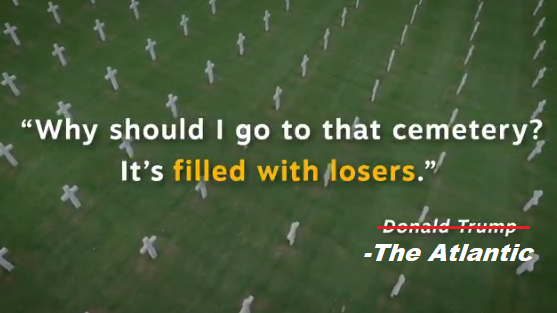 
On Thursday, The Atlantic published an article, citing four anonymous sources who claim that in 2018, President Trump called fallen soldiers buried at France’s Aisne-Marne American cemetery “suckers” and that the grounds were “filled with losers,” and “blamed rain” for canceling a planned visit to the site.

The report has been vehemently refuted by Trump administration officials, and is already beginning to unravel.

On that Atlantic Story – @JeffreyGoldberg and his “four sources” claim Trump’s helicopter flight to the US/French cemetery wasn’t cancelled due to weather.

FOIA docs prove this to be false.

The Atlantic‘s EIC, Jeffrey Goldberg, said the sources wanted to remain anonymous because “They don’t want to be inundated with angry tweets and all the rest.”

“They don’t want to be inundated with angry tweets and all the rest…”https://t.co/s2ESFCOMi0 — from @MikeBrestDC at @dcexaminer pic.twitter.com/IAANsJuIgH

Perhaps even more interesting is an anti-Trump ad from ‘VoteVets’ based on the Atlantic article which cropped up a mere 12 hours later, raising questions over whether this was a coordinated hit.

Very interesting that the Goldberg story drops just hours after Trump appoints an Ambassador to Afghanistan who actually wants to withdraw troops https://t.co/PTAyu1c6la

Spoke to a source who doesn’t want to get tweets at, that while there’s no way to prove it without going on record, this arranged call, plus an ad already airing on Morning Joe sure looks like coordination. My source has nothing further to add. https://t.co/zFvYgbG6cW

This ad was produced in under 12 hours? https://t.co/7U0DCZfBbt

Looks like we can file this one under ‘dirty politics.’

As Monica Showalter opines in American Thinker regarding Trump’s relationship with the military:

He’s always celebrated servicemen and servicewomen. He’s visited injured servicemen and made trips abroad to be with servicemen. One of the most notable things he’s done has been to call in enlisted and noncommissioned soldiers and sailors to solicit their input about how to make things better in the service for them. He’s beefed up the military budget and demanded military parades to celebrate events. He’s celebrated military victories. He’s also cared deeply for the welfare of soldiers and sailors — specially calling up the family of young servicewoman Vanessa Guillen, who was murdered by a sex-harassing stalker also in the military — and talking about a plan of reform. He’s ordered Saudi “students” out of U.S. military facilities after one of them tried an al-Qaeda-style attack. He’s put veterans first in the Veterans Administration, reducing waiting times and raising customer satisfaction. He’s been ultra-respectful of the military brass, defending a naval commander who broadcast the presence of COVID on his ship to the press (and America’s enemies) instead of up the chain of command, recognizing that if he was misguided, or “had a bad day,” as Trump put it, he was trying to look out for the welfare of his sailors. Trump explicitly said he “didn’t want to ruin” the captain’s career with a relief of command. The captain was reinstated, and the naval bureaucrat who derided him was fired.  If anything, Trump’s been a little too solicitous and trusting of the Pentagon brass.  He hired Deep-State political animals such as H.R. McMaster, Jim Mattis, and John Kelly, all of whom turned out to be major disappointments, with at least some of them compulsive plotters and leakers on the side.

Trump adores the military and honors America’s heroes.  He adores them so much that the left, up until now, has called him a “Nazi” for it, which is about par for the left.  Now the canard is going out that he doesn’t like them at all.  It’s another shape-shifting “narrative” unmoored in facts.

To claim that Trump would make remarks about not wanting to get his hair wet and would therefore refuse to visit a storied military cemetery in France because the dead all were “losers” defies belief.  It’s clearly false.  Trump himself has utterly denied it, with an edge of fury, given all he has shown of his care for the military.  And a lot of the people who were there, with names attached, said it was garbage, too.