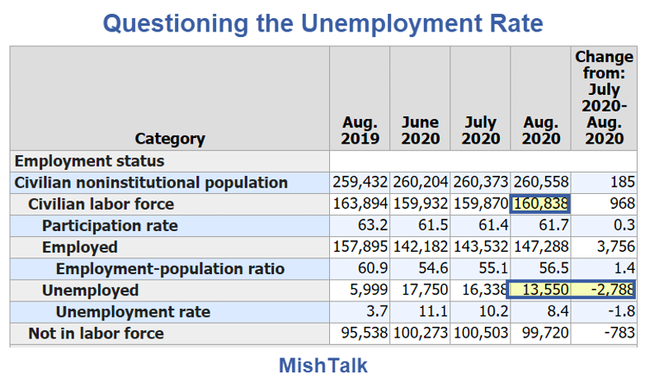 The BLS says the unemployment rate fell from 10.2% to 8.4%. Other BLS data casts doubt on the number.

The unemployment rate is calculated by dividing the number of unemployed by the civilian labor force.

Note that the reported headline jobs number today (+1.4 million) has nothing to do with anything. That is the establishment report number.

The number of employed (+3.756 million) does play into the calculation, but indirectly, as the labor force denominator.

Note that employment rose by 3.756 million but the Labor Force only rose by 968,000. The impact of this discrepancy actually boosts the unemployment rate, but only by a tiny amount.

It’s the numerator that matters. The numerator should match continuing claims. It doesn’t.

The BLS reference week is the week that contains the 13th of the month. That is the week of August 9-15.

14.492 million is the extreme lower bound we should see for the number of unemployed.

State claims only include those eligible for state unemployment insurance.

Primary PUA claims for the reference week were 13.57 million, an increase of 2.6 Million.

PUA picks up all 4 categories missing from Continued Claims. But it also picks up some number of part-time workers.

But at least some of those 13.57 million did not work at all.

For the sake of argument, assume a mere 3.0 million of these workers did not work at all.

I discussed other discrepancies in my Jobs report earlier today.

Don’t try to make sense of those numbers as they never add up. I list them as reported.

For details please see Jobs Report Much Better Than Expected, But Is It Believable?

On top of this mess is a BLS methodology change that artificially lowered the number of initial and continued claims starting yesterday.

I suppose it is possible for the claims revision to be correct, but that still does not account for all the gig etc. workers on Pandemic Assistance that are genuinely unemployed.

My conclusion is today’s unemployment rate numbers are total garbage.