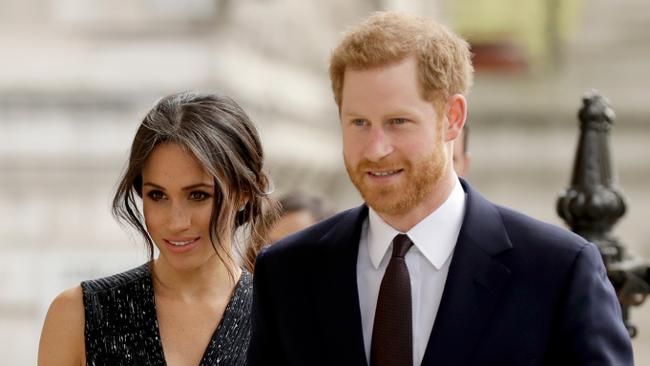 The Not Very Fresh Prince of Bel-Air

“Thanks so much for coming. Time is money, so why don’t you two pitch me your new TV ideas?”

“Great. So, like, we have a few ideas. The first one I was thinking, you know, about this beautiful girl who struggles and then becomes a famous actor, in a legal drama, and then suddenly gets married to a handsome prince in some rainy European country. But she can’t stay. She just can’t. She has a calling to keep her royal title while doing no real royal duties, and to go back to the US and write TV series in a deal that could worth up to $150m. It will inspire children everywhere.”

“Yah. And I had this idea about a handsome prince who does army stuff. And then army games stuff. Yah. And then he meets this TV star and it’s all will-they-won’t-they? And then they will, and they get married. Yah. And then they have to drop the whole royal thing, apart from all the security and lovely homes and first-class travel, obviously, yah. And so they move to the US and write TV shows in a deal that could worth up to $150m. It will be inspirational. For kids. Yah.”

“I love it! Such fresh content ideas! Here’s a contract that could be worth up to $150m!”

There are a lot of tall market tales out there right now. Prince Harry and Princess Meghan, two wealthy individuals with NO writing experience at all, the ginger of whom is not exactly renowned for his reading, or choosing appropriate Halloween costumes, securing a reportedly up-to USD150m media-deal to produce “inspirational” socially-aware TV content that “gives hope” is just one of them: “The Not Very Fresh Prince of Bel-Air” (actually Santa Barbara), coming soon to a screen near you. Of course, there are many other bad scripts out there too.

Optimists are talking about the US government talking about a virus vaccine being rolled out on 1 November – which has nothing, n-o-t-h-i-n-g, to do with the US election two days later, honest; I mean who would write that script?!

The same group might want to note that FOUR major central banks have given recent indications they are worried and will need to do even more: the ECB, the RBA, the RBNZ, and the BOE. If we add in the Fed’s mixed Beige Book and the disappointing ADP jobs number yesterday, suggesting the US labour market recovery may have stalled, and that Singapore’s MAS is seen as leaning towards a weaker SGD, which is how they ease, then we actually have six central banks sending a message that is far from cheery. Not that this matters to stocks, of course. More stimulus is always welcome.

Whether any particular firm, let alone all firms together, justify their current stock prices is not a matter for this Daily. What can be noted, however, is that if they do, then we have a US economy in which we see not capitalism but central-bankism, as we recently called it; or a capitalism where the income and spending of just a subset of the populace is all that really matters. Tens of millions can be unemployed and/or homeless but that just doesn’t matter, either economically or in terms of key stocks. (At least mass homelessness is something that will now be temporarily mitigated by a Trump administration order to prevent private-sector evictions, a major social measure that the financial media has seemingly deigned is not worth covering at all for some reason.)

Sounds like an impossible tale, right? Well try life in many emerging markets where income and wealth distribution is so skewed there that just a subset of the population dominate ‘GDP’, and ‘markets’, while the majority are written out of the script…except to serve food and drinks and give foot massages or act as golf caddies. As Branko Milanovic notes again this week (and I had flagged personally as inevitable under neoliberalism far back as the early 2000s in a script that did not get picked up, so to speak), some developed and emerging markets are now meeting in the middle; and richer emerging markets are also diverging in performance from poorer ones. It’s the K-shape recovery all round. (I doubt this will be a theme addressed by the flow of “hope” from Santa Barbara, but one lives in hope.)

Back to more mundane, but important market tales. Those who have been selling the script that USD curve steepeners are the future as yields will spike might want to note that flattening is still the more likely outcome in our view. See this BIS report on the march of zombie companies, which sounds like a good movie as well as an economic nightmare: “No brains! No braaaaains!”

Likewise, the tall tale that the USD was going to keep weakening forever and ever (“Honey, I Shrank the Dollar”) has a twist, as we can see that the Dollar can go up as well as down!

On which front, consider also the figure seen as most likely to replace Shinzo Abe as PM of Japan is the old political warhorse Yoshihide Suga: and the Japanese press reports he favors a neoliberal policy mix of fiscal tightening, more casinos, increases in immigration, and a weaker JPY. So deflationary at home on one hand, and a weaker currency on the other, meaning Japan would export deflation to everyone else too. It’s not a very fresh policy script, but since when has that stopped these kind of things happening?

Likewise, the EU and the UK continue to play The Two Stooges over the shape of a Brexit trade deal, with much of the impasse over fishing rights. We have weeks left to go, and if nobody blinks then it’s hard to see how both EUR and GBP don’t take a not very fresh fish full in the face too.

Elsewhere, Russian opposition politician Alexander Navalny was apparently poisoned with Novichok, which analysts suggest shortens the list of potential perpetrators to state-backed actors. Even Germany’s Merkel seems piqued by this – enough to do something market-moving? RUB selling off suggests perhaps. Not enough to cancel Nordstream 2, however, one would imagine.

Staying with Russia, its navy plans live-fire exercises inside maritime territory claimed by Turkey later this month, which is carrying out its own live-fire exercises: Moscow is not backing Ankara, in other words, which is not much good for TRY either if you think about it. India-China border tensions also continue to escalate despite the script recently being that everyone had gone home and everything was just fine: India also banned a further slew of Chinese apps yesterday.

Which inspires me as I type: if you want to see some real, quality media content that is also a visual metaphor for how current geopolitical and market memes–“Steepeners! Short USD! DM looking like EM isn’t important! Geopolitics doesn’t matter and bad things can’t happen because otherwise it’s bad for my pension!”–will play out, try this. It has inspired generations of children: if Harry and Meghan come up with something a fraction as good, we will all be delighted.