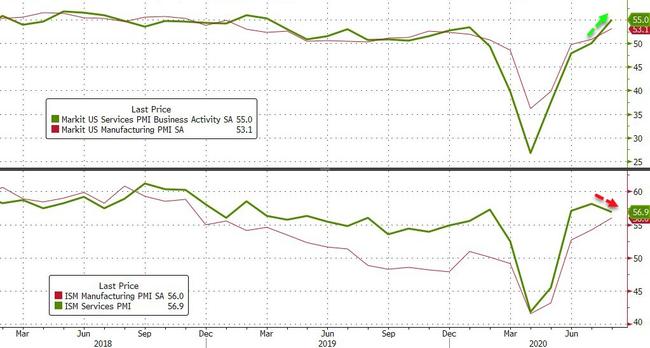 
After US manufacturing ‘soft’ surveys showed more progress in the V-shaped recovery, today’s US Services data was expected to confirm that rebound.

So take your pick – ISM down, PMI up.

The Markit Services data was up from the flash print of 54.8 as both the Markit measures rose as the US Macro data overall has rolled over…

In the ISM Services sub-indices, we saw a notable weakening in new orders and activity.

Putting all this together, the US composite index printed 54.6 in August, up from 50.3 at the start of the third quarter, to signal a strong upturn in business activity.

Sentiment about output over the coming year meanwhile edged down slightly from July’s 15-month high. Uncertainty surrounding the pandemic’s future impact on the economy continued to weigh on confidence at manufacturers, contrasting with improved optimism among service providers.

“Surging inflows of new business helped propel service sector activity higher in August, with the sector growing at its fastest rate for almost one and a half years. Firms were often left struggling to meet demand and, despite taking on extra staff at a pace not seen for over six years, backlogs of uncompleted work accumulated at a rate exceeding anything recorded since 2009. The increase in backlogs of work bodes well for robust output growth to persist into September.

“Combined with the stronger picture emerging from manufacturing in August, the improved performance of the vast service sector adds to signs that the third quarter will see an impressive rebound in the economy from the collapse seen in the second quarter.

However, Williamson also notes that the survey also highlights how the rebound is very uneven and the recovery path remains highly uncertain.

“August’s growth was driven by financial and business services as well as tech firms, but consumer-facing sectors such as travel, tourism and recreation remained firmly in decline due to the need for ongoing social distancing.

“Companies across the board also remain concerned about resurgent virus infections and the durability of demand in the coming months after the initial rebound potentially fades, with uncertainty over the Presidential election adding further risks to the outlook for many companies.”