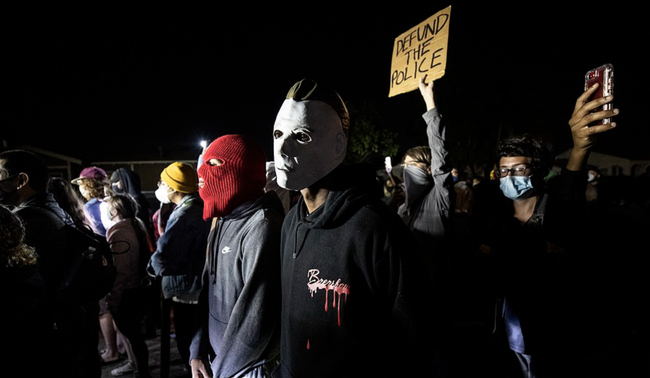 
Following deadly shootings in Kenosha and Portland over the past week during demonstrations allegedly inspired by the latest police shooting to rock the nation, a black man was shot and killed by a sherrif’s deputy in LA Monday night after the man allegedly punched the deputy before whipping out a handgun, prompting two deputies to fire their weapons.

Now, hundreds have gathered in peaceful protests in LA last night, laying siege to an LA sheriff’s office in the latest tense situation to emerge during the nationwide protest movement which has dragged on for 100 days.

As has become distressingly common in recent weeks, this latest police shooting involving a black man inspired hundreds of people to gather – just like they did after Jacob Blake was shot by police – across south LA to protest this latest “senseless” police killing of a black man before any facts and information have been collected.

The man, identified by family members online as Dijon Kizzee, was observed by deputies riding a bike down along 110th Street and Budlong Avenue in violation of an unspecified vehicle code. The officers made a U-turn in their vehicle to approach him. A police public information office said he was “unable” to specify which vehicle codes Kizzee had been accused of violating before police approaching, apparently not realizing how protesters might seize on this as evidence of police skulduggery.

As officers approached, the suspect fled, but officers later caught up with him. As officers moved in, Dijon allegedly sprinted away, dumping a bundle of clothes he had been carrying. What comes next is a little hazy, but both deputies said they saw a semiautomatic handgun in Kizzee’s possession, which is when both deputies fired their weapons.

“Give us time to conduct our investigation,” Dean said. “We will get all the facts of the case out and eventually present them.”

Kizzee was pronounced dead at the scene, and no deputies were injured.

In the early hours of Tuesday morning, a crowd of around hundreds of ‘people from the neighborhood’, mixed with full-time activists, gathered at the scene of the fatal shooting in Westmont in the latest “demonstration” against lethal use of force by police.

Report on protest of killing of black man in LA. https://t.co/9W6HIlDLJl

A post on the Black Lives Matter LA Twitter account reportedly galvanized the protesters to gather at the scene before they moved to the sheriff’s office.

Los Angeles County Sheriffs killed a Black man…Dijon…on 109th and Budlong and left his body facedown in the dirt.
We need all hands on deck.
Please get here ASAP!

Police worried about the situation have taped off the entrance to the sheriff’s office in LA.

Another “Black man” shot in LA and the protests have already started before any facts have come out! pic.twitter.com/OlbyMJNLkl

One unhinged protester even shouted some surprisingly racist statements at the police.

Video from the protest showed a man addressing the crowd through a megaphone, urging them to ‘Say his name’, to which the crowd responded in chorus, ‘Dijon Kizzee.’

About 75 to 100 demonstrators are gathered near West 109th Place and Budlong Avenue in South L.A. where deputies with the Los Angeles County Sheriff’s Department shot and killed a Black man earlier today https://t.co/xCnRQq1v6r pic.twitter.com/XQXpwWpR16

No incidents have so far been reported. However, video of officers and protesters getting physical have already emerged on social media.

Crowd in LA has moved to sheriff’s office. #LA pic.twitter.com/vEe5Y2B5u6

Meanwhile, back in #LosAngeles shit is getting tense in #SouthCentral. pic.twitter.com/EwlGv8EjvM

One streamer is still broadcasting live from outside the sheriff’s office as of early Tuesday morning.

Are we finally about to see a re-run of the LA riots inspired by footage of the beating of Rodney King.