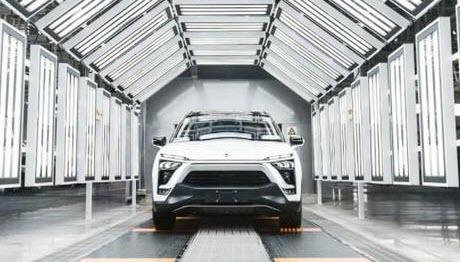 
Just weeks after we reported that many EV manufacturers in the super-saturated Chinese market were going public to avoid bankruptcy, we are learning that China’s local governments are also doing everything they possibly can to keep the country’s EV projects afloat.

For example, when NIO was under tremendous financial pressure just months ago, it was the municipal government of Hefei that stepped in to bail the company out by investing $1 billion in cash for a 24.1% stake in the company’s China’s entity – and getting the company to relocate its headquarters to its province. Hefei has “hopes of creating a powerful rival to Tesla,” according to Nikkei.

Similarly, other local governments have stepped into help China’s young EV names. Not unlike Elon Musk’s Tesla, China’s Nio, Xpeng Motors, Li Auto and WM Motor have also all relied on taxpayer/state money to push their visions forward. In China, the state backing could work to divide the country’s push to take on Tesla, instead of unify it, according to Nikkei.

But states are still broadly supporting an agenda that was set in Beijing that makes it clear that EVs are going to be a huge part of the country’s “Made in China 2025” initiative going forward. China has a goal of pushing NEV vehicles to 25% of all overall car sales by 2025.

China is already the largest EV market in the world, making up 57% of the global market as of April 2020. In addition to Tesla, the market is dominated by well established names like BYD and GAC Group. Tesla has already carved out a 20% market share for themselves in China, demonstrating the appetite for smart vehicles in the country. If startups want to compete, they need the government help.

Cui Dongshu, secretary general of the China Passenger Car Association said: “The regional governments are very strong investors. They will be the lifesaver for China’s EV startups.”

The modus operandi of state government investments are that EV startups move their headquarters to the province and build factories in the region. “Hundreds of city-level governments are competing for big projects. There are not many good ones at the moments,” Cui continued.

And regional investors have been access to capital than private investors. They can raise trillions in yuan from bonds while focusing more on the “benefits to the overall economy over financial return”.

But the state backing could also cause additional scrutiny from the U.S. government, as tensions between the two countries continue to rise. In a day and age where the U.S. has grown increasingly skeptical of Chinese technology, there could also be growing skepticism about state backed Chinese EV makers looking to break into the U.S. market. That is, if the Chinese state already hasn’t done so with Tesla…

Sujoy Sarkar, head of corporate development at Byton, said: “China is now a world power, and the U.S. government wants to protect its own interests, especially [concerning ] such technologies at a scale that affects everyone.”

Sarkar continued: “Based on my own experience, I’d say most [Western] investors are capitalists, and most prefer limited to no government involvement.”

Wayne Shiong, partner at venture capital China Growth Fund, said: “The involvement of state capital is necessary because the automobile industry concerns the national interest and people’s livelihood. An industry consolidation will come much later.”

Recall, we wrote about the successful IPO of Li Auto on the U.S. markets. It has “received investments from several entities backed by municipal governments of Changzhou and Xiamen as well as state-run investment bank China International Capital Corporation.”

Additionally, we reported weeks ago that competition in China’s EV market is starting to become super-saturated. But rather than actually allow the market to consolidate and eliminate some of the smaller players, Chinese EV companies were taking another route to stave off going under: going public.

After all, what better way to put a company that’s not meant to survive on life support than to sell shares of it to a public that doesn’t know how to read financial statements?

Hozon New Energy Automobile was the latest name to launch an IPO, Bloomberg pointed out in a recent article, saying it wants to list in Shanghai next year. Hozon is trying to capitalize on lower priced vehicles, offering an electric SUV for less than $10,000. The company has already shipped more than 16,000 vehicles. WM Motor is seeking a valuation of about $4.3 billion and is backed by names like Baidu and Tencent.

Robert Cowell, an analyst at Shanghai-based private-equity firm 86Research Ltd. told Bloomberg: “The strength in Tesla and NIO shares is creating a window for new EV startups to list. The current conditions provide an attractive opportunity to raise funds, which can help some of these smaller startups sustain the investments necessary to compete effectively.”

This has given hope to the dozen or so EV names that have been able to raise money in China. They have emerged from a group of nearly 100 EV startups, all helped along by the government’s promise of subsidies for the industry. But its likely that out of the dozen that will make it to the public markets, not even all of those candidates will be successful.

For the rest, maybe they can fall back on the Chinese government…