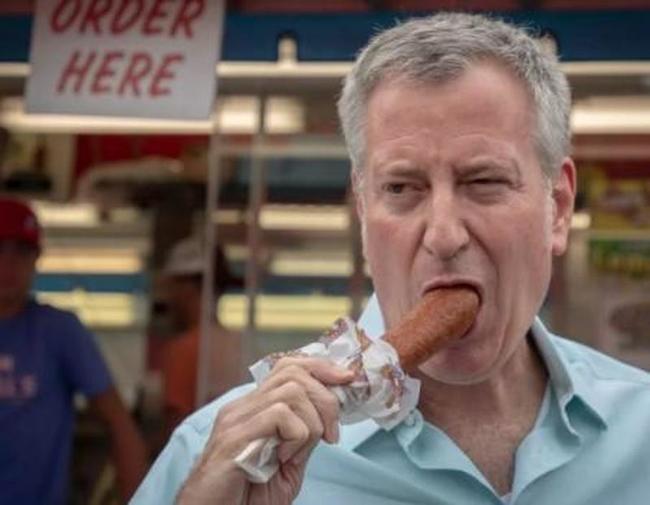 
Not satisfied with watching from the sidelines as his city descends into a war zone, Mayor Bill de Blasio seems to be doing everything he can to drive citizens and business owners out of the city. His latest idea came on Monday, when de Blasio said he may not open indoor dining in the city until a vaccine for Covid is released. This means that indoor dining in the nation’s most popular city may not happen during 2020, despite the fact that outdoor dining is going to be far more difficult to continue heading into the winter months.

We’re sure this will be the most “popular” idea with restaurant owners since Philadelphia’s Mayor was spotted dining indoors in Maryland while keeping Philadelphia-area restaurants shut down for indoor dining. The news, obviously, could be crippling to business owners.

de Blasio has backed a June 1, 2021 re-open date, despite many other major U.S. cities all setting up to re-open heading into the fall. He said Monday: “We do expect — and pray for and expect — a vaccine in the spring that will allow us to get more back to normal, but I will absolutely tell you, we’re going to keep looking for that situation where we can push down the virus enough where we would have more ability to address indoor dining.”

Meanwhile, the city is posting its lowest infection rate in months at 0.59%. Across the river in New Jersey, restaurants are setting up to reopen for indoor dining at 25% capacity starting Friday (in addition to open outdoor seating). Almost every other region in New York has also reopened for some type of indoor dining.

But de Blasio isn’t convinced: “Is there a way where we can do something safely with indoor dining? So far we have not had that moment, honestly. It’s going to take a huge step forward to get to that point and that’s the truth.”

Meanwhile, NYC residents are also taking “giant steps” as they flee the city in droves.