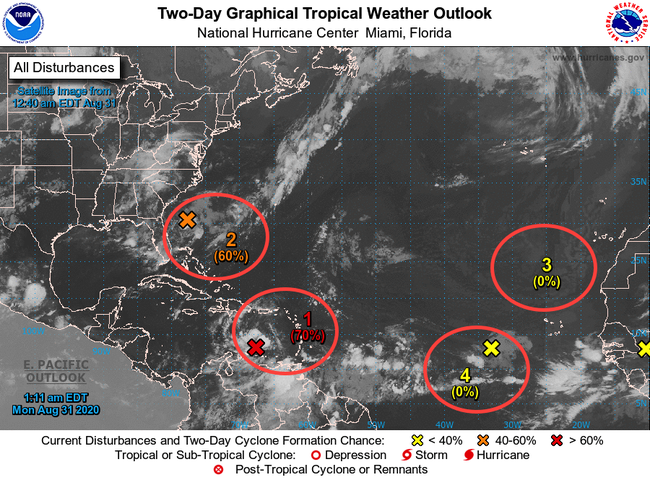 
The National Hurricane Center (NHC) is monitoring a “quartet of systems” brewing in the Atlantic.

Two systems are located in the western region of the Atlantic basin are likely to be upgraded to tropical depression status in the next few days. Two tropical wave systems are in the eastern Atlantic, near the coast of Africa and the Cabo Verde Islands.

The first disturbance, called Disturbance 1, of the quartet of storms that are brewing in the Atlantic, is located over the eastern Caribbean Sea. Probabilities, at the moment, have the storm at 70-80% of developing into a tropical depression over the next 2-5 days.

Disturbance 2 is located a couple of hundred miles east of Jacksonville, Florida, and has become more organized on Sunday. The storm is expected to be upgraded to a tropical depression by mid-week and move “northeastward or east-northeastward, initially parallel to the southeastern coast of the U.S. and then away from land,” the NHC said.

Disturbance 3 and 4 are tropical waves that have a low probability of forming over the next five days. Both systems are slow-moving in the eastern Atlantic, near the coast of Africa and the Cabo Verde Islands.

If all four disturbances were to develop into named storms, they would be Nana, Omar, Paulette, and Rene.

So far, the 2020 hurricane season has been extremely active (read: “La Nina Could Spark Active Hurricane Season As Trump Set To Drain FEMA Funds”), 13 named storms have already been seen, with the latest ones, Hurricane Laura and Marco, causing a ruckus in Lousiana.