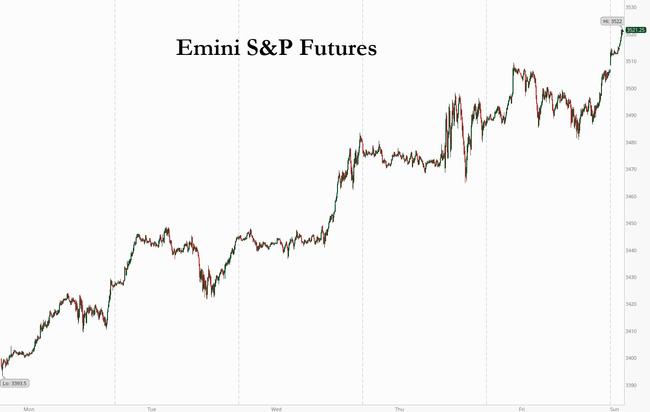 
There were audible gasps across Wall Street on August 15th when the latest Berkshire 13-F revealed that the Oracle of Omaha had cut his stakes in most US banks (and fully sold out of Goldman), while taking a new and unprecedented for Berkshire Hathaway position in Barrick Gold.

But while Warren Buffett, who turns 90 today was dumping US banks, he was quietly building up sizable stakes in the five of the largest Japanese trading companies.

In a press release published late on Sunday, Berkshire Hathaway revealed that it had acquired stakes in Itochu, Marubeni, Mitsubishi Corp., Mitsui and Sumitomo of “slightly more” than 5%, signaling it may increase those holdings in the future. These holdings were acquired over a period of approximately twelve months through regular purchases on the Tokyo Stock Exchange.

According to the statement, Berkshire  Hathaway’s  intention  is  to  hold  its  Japanese  investments  for  the  long  term. “Depending on price, Berkshire Hathaway may increase its holdings up to a maximum of 9.9% in any  of  the  five  investments.  However,  Warren  E.  Buffett,  CEO  of  Berkshire  Hathaway,  has  pledged that the company will make purchases only up to an ownership of 9.9% in any of the five investments.  The  company  will  make  no purchases  beyond  that  point  unless  given specific approval by the investee’s board of directors.

Buffett expressed his pleasure with the investments:

“I am delighted to have Berkshire Hathaway participate in the future of Japan and the five companies we have chosen for investment. The five major trading companies have many joint ventures throughout the world and are likely to have  more  of  these  partnerships.  I  hope  that  in  the  future  there  may  be  opportunities  of  mutual  benefit.”

The release also noted that Berkshire Hathaway has 625.5 billion of yen-denominated bonds outstanding, maturing at various dates beginning in 2023 and ending in 2060. Consequently, the company has only minor exposure to yen/dollar movements.

Following the report, the five named stocks spiked and Nikkei futures jumped by more than 1%…

It wasn’t immediately clear what prompted Buffett to transition out of US money-center banks whose performance has been dismal in 2020 compared to the surge in tech, and into Japanese traders at a time when the BOJ dominates most capital markets (and was last seen in possession of 80% of all local ETFs), and just as Abe announced his resignation, putting the future of the entire Abenomics platform in question, but we are confident that some bullish spin will be forthcoming.

On the other hand, the fact that Buffett – who famous has said “never bet against America” – just turned 90 today may be the more accurate explanation.