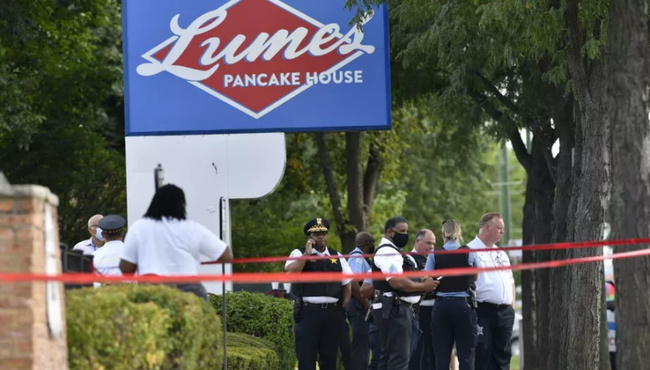 
Yet another consecutive weekend of deadly gun violence has rocked Chicago, as President Trump continues to go after Democrat-run cities with his restore law-and-order emphasis.

The numbers of dead and wounded in Chicago this weekend are staggering, but yet again there’s barely a blip in major network coverage, which have opted instead to cover mayhem of a different sort related to ongoing Black Lives Matter protests and “race politics”. CBS Channel 2 Chicago reports:

At least 50 people had been shot, and 10 of them had been killed, so far this weekend in Chicago as of Sunday evening.

Among those wounded in shootings this weekend were two police officers, along a suspect whom a third officer shot, in Homan Square. Meanwhile, one man was killed and four others were injured in a mass shooting Sunday at a pancake house dining tent in Morgan Park.

Noticeably, two police officers were shot in Chicago over this latest weekend of bloodshed, but are expected to recover.

The crisis and blood-spilled streets of Chicago and other cities, increasingly New York City witnessing its own violent crime outbreak too, has led some commentators to observe that for the mainstream it seems only some Black lives matter, given the extreme disparity in coverage.

The mayhem on Chicago streets this weekend included what local media is calling a “mass shooting” in broad daylight on Sunday, given that five people were shot when a gunman drove up to an outdoor restaurant socially distanced tent and opened fire:

The mass shooting in Morgan Park happened around 2 p.m., an hour before closing, at the Lumes Pancake House at 11601 S. Western Ave.

The five adults were shot as they ate outside under a tent the restaurant had set up, according to the police and fire departments. Earlier reports had said six people were shot, but police later said it was five people.

A 31-year old man believed to be the main target in the shooting died of his wounds.

The shooting itself appears to have taken place inside this tent which is in the parking lot of Lumes Pancake House. #Chicago #ChicagoScanner pic.twitter.com/T4tuAorvrQ

A waitress described of the shock and chaos of the scene: “Everybody started coming running in, and they were in the back in they were shooting. The guys came in the tent and started shooting everybody in the tent,” according to CBS 2.

The tragic incident further begs the question: how is it that a mass shooting in broad daylight goes largely unnoticed on the major networks like CNN or MSNBC?