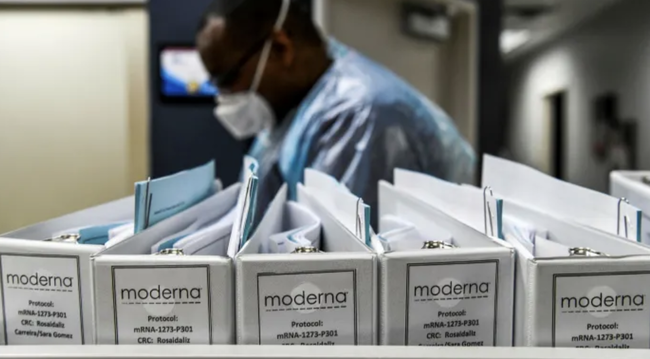 
Before the mainstream media transfigures Moderna founder and CEO Stephane Bancel into  a corporate savior on par with Bill Gates, we’d like to remind investors (and the public) that Moderna and its insiders have demonstrated an eyebrow-raising affinity for pumping the stock with over-hyped press releases then cashing in shares or warrants (all insider stock sales were pre-scheduled divestitures, the insiders’ lawyers have argued).

Despite receiving nearly $1 billion in taxpayer money via “Operation Warp Speed”, the drugmaker is planning to charge as much as $37 for a single dose, or up to $60 for two courses, of its experimental mRNA COVID-19 vaccine. That’s far and away the highest price point disclosed yet.

And while we wait for more detailed data from the vaccine’s Phase 3 clinical trials, patent advocacy group KEI is taking Moderna and its executives to task for neglecting to disclose government funding received by the company during its early stages, before the coronavirus pandemic.

Despite receiving $25 million from the Department of Defense’s “Defense Advanced Research Projects Agency” – or “Darpa” – Moderna has never disclosed this, or any other, government funding in its applications for 126 patents and 154 patent applications. KEI has lodged a request with the DoD and Darpa to remedy this in patents.

As KEI points out, Moderna’s “failure” to disclose its government funding could have serious consequences for Americans hoping to get their hands on an affordable vaccine. The disclosures could affect everything from the US government’s worldwide royalty free license, to the public’s march-in rights, to obligations to make inventions available to the public on reasonable terms.

When approached by the FT, Darpa confirmed that Moderna was required in its contracts to disclose the funding in any patent applications that stemmed from research that the US government helped fund.

Now, Darpa is actively looking into which Moderna patents may have been produced with Darpa support, so the US government can take credit where credit is due.

“It appears that all past and present Darpa awards to Moderna include the requirement to report the role of government-funding for related inventions,” Darpa spokesman Jared Adams said in an emailed response to the Financial Times. “Further, Darpa is actively researching agency awards to Moderna to identify which patents and pending patents, if any at all, may be associated with Darpa support,” he said. Mr Adams declined to comment further, saying the investigation was continuing. US federal law required government funding to be disclosed in these circumstances, he noted.

Now, keep in mind that Moderna is trying to charge as much as $37 per dose for its vaccine, when the vaccine being developed by AstraZeneca and the University of Oxford is priced at about $3 per dose.

Maybe Moderna can make amends for these mistakes by cutting the price its charging the US government for a vaccine that it developed with the help of a massive infusion of government money?