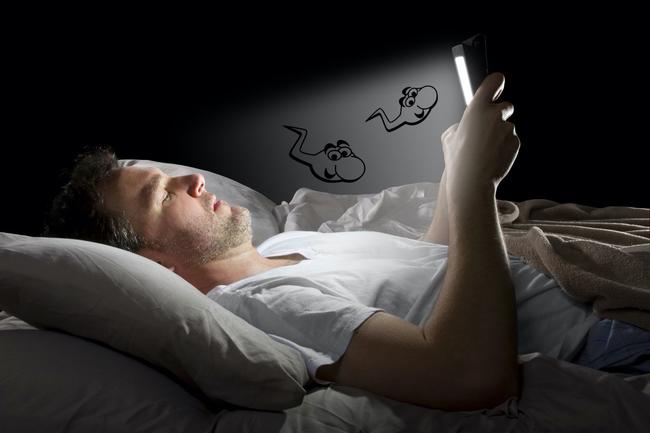 
Readers may recall we noted sperm counts in Western men had slumped nearly 60% over the decades. Though researchers have not been precise of what is causing the decline, some have suggested there’s a link with the use of electronics.

“The last several decades have been characterized by the widespread usage of digital devices, especially smartphones. At the same time, there have been reports of male fertility decline. This study aimed to assess the relationship between evening exposure to the light-emitting screens of digital media devices and sperm quality,” said Amit Green, Ph.D., head of research and development at the Sleep and Fatigue Institute at the Assuta Medical Center in Tel-Aviv, Israel, who led the study titled “Light Emitted from Media Devices at Night is Associated with Decline in Sperm Quality.”

Preliminary results showed men who use light-emitting media devices in the evening and or right before bed experienced a more significant decline in sperm quality:

“The results of this study revealed a link between evening and post-bedtime exposure to light-emitting digital media screens and sperm quality. To the best of our knowledge, this is the first study to report these types of correlations between sperm quality and exposure time to SWL emitted from digital media, especially smartphones and tablets, in the evening and after bedtime,” he said.

For this study, researchers used semen samples from 116 men between the ages of 21 and 59. Participants were also asked about their electronic use and sleep habits.

Green also noted a relationship between sperm quality and sleeping habits. Men who slept longer had higher sperm counts, as opposed to men who had sleep disorders.

So here’s the big issue and why it matters for the next economic expansion: declining sperm quality and population growth slowdown, or in some countries, reversal, will directly affect GDP growth.

The Western world is plagued with a declining, aging, and heavily indebted population with zero interest rates, along with monetary drag, which will result in less future consumption, and force overcapacity to be cleared

So if men want to ‘make the Western world great again’ – put down the iPhone or tablet at night, your nation’s survivability depends on healthy sperm.