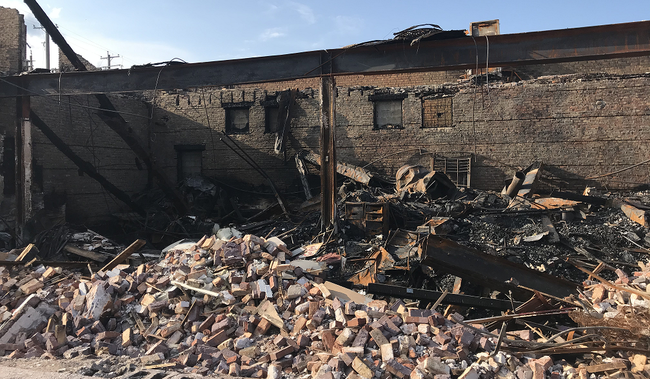 
Harrowing scenes of destruction have emerged from Kenosha, where several nights of BLM riots have left the Wisconsin town looking like it’s been through war.

Entire buildings have been reduced to rubble, businesses have been destroyed, and parking lots full of burnt-out cars are all that’s left in some parts of the town, after riots over the shooting of 29-year-old black suspect Jacob Blake only came to a halt after President Trump sent the National Guard to restore order.

Josh Glancy, Washington Bureau Chief of the Sunday Times documented some of the aftermath, which locals believe was caused largely by “out of towners.”

Every single local I spoke to blamed “out of towners” for the worst of the destruction. They didn’t offer a huge amount of evidence for this, but it’s a blanket consensus /4 pic.twitter.com/vboZYrRK9y

Pretty much every boarded up shop has a mural or painting on it now. Some have plaintive requests to prospective fire starters: “Kids live upstairs” /6 pic.twitter.com/PcaNJs3lnK

The owner of this bar told me they’d opened just before the pandemic. Having eventually reopened, it was broken into this week, he estimated $25k worth of damage /8 pic.twitter.com/4BFh8zcgRM

Glancey closes by noting: As we were talking, a young man came to ask the owner where the nearest post box was. “There used to be two across the street,” he replied. “But they both just got burnt.”

President Trump couldn’t have asked for a better campaign advertisement.

Success: Since the National Guard moved into Kenosha, Wisconsin, two days ago, there has been NO FURTHER VIOLENCE, not even a small problem. When legally asked to help by local authorities, the Federal Government will act and quickly succeed. Are you listening Portland?

Meanwhile, Trump will be in Kenosha on Tuesday…

Will they cart Biden out of his basement to do the same? We would note that Trump visited flood-ravaged Baton Rouge when he was a candidate in 2016 following Louisiana’s worst natural disaster since Hurricane Sandy in 2012.