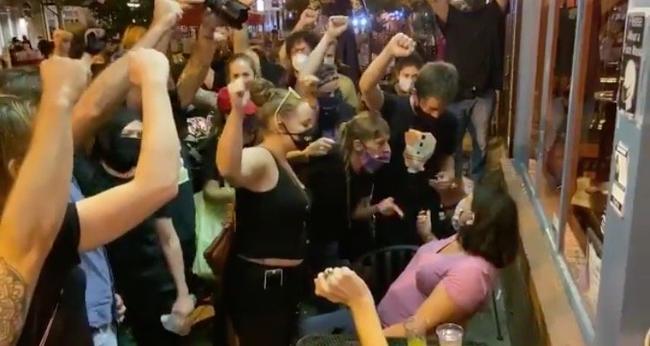 
Authored by Terry Trahan via The Organic Prepper blog,

I’m sure you’ve seen the video below by now.

Political activists/bullies, encroaching on people’s space to make their point, and, more importantly here, trying to intimidate the people into giving up their freedom to give the rioters their way.

The first thing I want to say about this is it is a difficult situation. Especially the more middle class you are, or the more formal the setting you are in.

The first difficulty is overcoming your upbringing and being able to shift gears out of the dining mindset into the confrontation/defense mindset.

As I wrote about earlier, mindset is your friend here. You are just there to do the job at hand.

Doing the job, however, requires a few things to find the proper response.

You really need to be able to read the crowd, both the other diners and the thugs demanding your obeisance to their worldview. Can you count on help from others in the diner crowd? Maybe, but “hope” is not a plan, and you cannot count on it. The most important read you can do is on the thugs/activists.

You need to assess, rapidly, their dedication to their cause. Look for obvious clues to how violent they might be:

You need to be able to do this unobtrusively, quickly, and be able to process the information to make a plan of action.

There are a few basic courses of action you can take.

The first is to sit there and take it. This may sound glib, but it is not. If your threat assessment determined that they are just going to yell and scream, you can just wait it out. Obviously, threat assessment must be ongoing, because it can change at the drop of a hat.

Always be looking for routes of escape, and don’t limit yourself to the obvious ones. If it gets bad enough, people make wonderful objects to break windows or drywall to make an emergency exit with.

Sitting there and taking it was the course of action the lady in the video chose, and in this case, it worked.

The next thing you can do is to get up and make your way inside the establishment and use that changed environment to get to the exit and leave. Unfortunately, you need to stay aware of the crowd you are escaping from. A mob is very susceptible to prey drive.

As my friend Rory Miller says, they can and will escalate to violence for several reasons, including to prove they belong to the group, and you are an outsider.

Using your cell phone to call the police is an option but seems to be a low return option at this point. Due to the civil unrest/riots everywhere, they may not have resources available to help you.

What if none of these options work? Move to “desperate options”

The next options are for when your threat assessment determines that it has the potential for violence, or it is now, actively, becoming violent. Beware, these options are hard and dark.

Aggressive Escape is the first “desperate option” we will cover. Using this option, violence comes first but is not the main point of the exercise. Basically, what you are doing is picking one of the opposing crowd, and attacking them violently to make a hole you can get through.

If you hurt one of the crowd, you need to make your escape as fast as you can, as the thugs will try to get payback on you for the damage and pain you have caused. If possible, use a weapon. If you do not have one on you, a restaurant is chock-full of useful tools. A water glass driven into an eye socket or the bridge of the nose. A dinner plate, edge first to the throat, or salt/pepper shakers to the temples, candles into the eyeballs.

I’m sure you get the picture.

The crowd has turned into a violent mob, what NOW?

Next, we get to the most serious scenario. Your threat assessment has determined violence is imminent or the crowd is becoming a violent mob. This is the time to become very matter of fact and know what job you need to do.

In my classes, I simply call these things ‘maiming’, and it is only for very serious situations. This is where you begin taking people apart. We have all heard the jokes about throat punching… This is what it is for. Steak knives, gouging eyes, ripping noses, fish hooking, vile things made to make your attackers back up so you can keep making your way to escape.

There is no way to make this nice, and I want to reiterate, this is for the worst-case scenario, and it can be nasty. This is where you only do things if your life is truly in danger, and you are doing this to escape and get your people to safety.

I’d like to close this by addressing things and questions that have come up in classes or emails.

What about stun guns?

I think they are worthless. My friends and I would play tag with them when we were younger. The only thing they are good for, in my opinion, is to make a quick hole to get through in a crowd. They are not a good choice.

What about pepper spray?

Pepper spray should be thought of as an eye jab in a can, a quick distraction to either escape or launch a stronger attack with a better weapon. It is a bonus that you can beat people with the can when it is empty. If you are going to use it to make an escape opening, please use 15% or better, and spray it either directly in to the face of one person, and make sure they get all of it, or, spray in a wide ‘S’ pattern too get more people.

Bear spray or pepper grenades are awesome, but I don’t think even I would be carrying those to a nice dinner downtown.

Is a gun the ultimate solution?

Well, maybe. It depends. That would be a giant can of worms to discuss here. Suffice to say that during a mob encounter, there are some things you need to think about and practice. Be prepared for serious legal ramifications in our current climate.

Mob violence is becoming more of a normal feature of modern life in the US.

Unfortunately, the dynamics of crowd violence and mob mentality make dealing with or planning for this type of encounter difficult at best. There are no good options, and you must be able to switch tactics on the fly.

As always, awareness is your best friend and primary warning system.