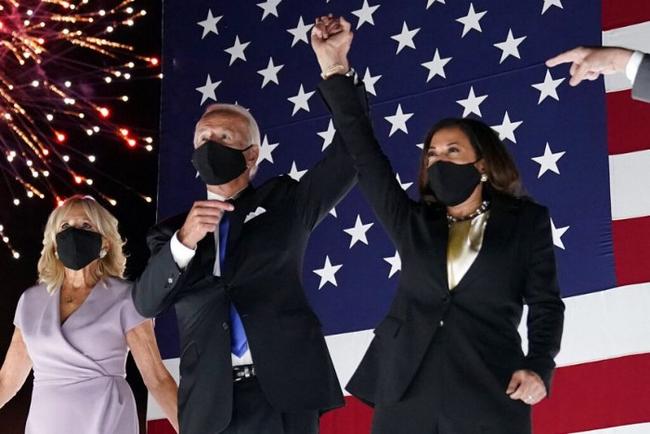 
Authored by Caitlin Johnstone via Medium.com,

The only interesting thing about either of the conventions held by America’s two mainstream political parties this month was not anything that was said by the interminable parade of vapid speakers, but rather what those speakers did not say.

Despite their dominating mainstream news cycles for years on end, at no time during the four-day Democratic National Convention was the word “impeachment” ever uttered, nor was any mention made of the Mueller investigation into allegations of collusion between Trump and the Russian government.

Eight months after Democrats mounted a historic effort to remove Donald Trump from office, not a single speaker uttered the word “impeachment” during their four-day convention.

For Democrats to completely omit impeachment from their convention was once unthinkable. Democrats had mounted a case that Trump had abused his power to blackmail Ukraine into investigating his political adversaries, including Biden. And they made an existential argument that without removing him from office, Trump’s behavior would get worse and democracy itself would be at risk.

Special counsel Robert Mueller’s investigation of the Trump campaign’s ties to Russia — which Democrats once thought could topple Trump for obstruction of justice — also went unmentioned, even as it was a defining feature of Trump’s nearly four years in office.

At DNC, “the word ‘impeachment’ [was] entirely left out over the course of the 4-night event. Mueller’s investigation of the Trump campaign’s ties to Russia… also went unmentioned, even as it was a defining feature of Trump’s nearly 4 years in office.” 🤔https://t.co/Dgt9WQ3LeA pic.twitter.com/q8EvEthwZq

“The fact that Democrats couldn’t bring themselves to even mention Russiagate or Ukrainegate (the first-ever sequel to a flop?) at their convention should maybe hasten some reflection for those who made these issues the ‘defining feature of Trump’s nearly four years in office,’” quipped incisive Russiagate skeptic Aaron Maté of the omission on Twitter.

“Next on Unsolved Mysteries: Democrats and media allies accused Donald Trump of being a Russian agent for four years,” Maté added. “They chanted ‘All Roads Lead to Putin’ and ‘The Walls Are Closing In.’ But at their political convention, they forgot all about it. Did Russia give them amnesia?”

“I personally feel like if the President of the US seeking re-election is beholden to and controlled by an adversarial foreign power, the opposition party should find a few seconds to squeeze in a mention of it if, you know, it wasn’t utter bullshit,” tweeted The Intercept’s Glenn Greenwald.

And, of course, it was utter bullshit. And that is indeed why the Democrats saw no need to mention it at their own four-day convention despite dominating news cycles with it for years. Russiagate and Ukrainegate were never the cataclysmic scandals that the Democrats and their allied media factions portrayed them as. They weren’t even actually about getting rid of Trump.

In an extremely strange and confounding development, the Democrats *never once* mentioned what this NYT columnist calls “the biggest lie in American politics” at their Convention.

In fairness, they only had 4 full nights so maybe they couldn’t squeeze in any mention of it. https://t.co/TMJkoiX199 pic.twitter.com/BvYjH4VZTc

Anyone with an ear to the ground knew that Russiagate would fizzle, and anyone capable of counting Senate seats knew impeachment would fail to remove Trump. The drivers of these attention-monopolizing narratives knew this also.

If there’d been any solid evidence to find that the Kremlin was blackmailing Trump, or that his campaign had conspired with the Russian government to steal the 2016 election, the US intelligence community would have found some of it and leaked it to The Washington Post long before Trump took office. The Russiagate narrative has been completely dismantled from the very beginning by journalists like the late Robert Parry, and then Maté after Parry’s death. There was never any real evidence for it, and the people pushing Russiagate from the beginning knew there was never any real evidence for it.

In 2017 Parry documented how the original assessment that Russia meddled in the US election in the first place was put forward without proof by just a couple dozen officers from three intelligence agencies hand-picked by the perjurer and notoriously Russophobic then-Director of National Intelligence James Clapper. Maté has documented that this allegation remains just as suspicious and porous as the day it was first made. Despite having sweeping investigative powers Mueller indicted not one single American for conspiracy with the Russian government. The recent evidence-free Senate Select Committee on Intelligence report did nothing to change the flimsy nature of the entire Russiagate narrative.

So the whole thing has been plainly bogus from the beginning, with the foundation laid by secretive and unaccountable intelligence agencies who have an extensive history of lying about exactly this sort of thing. And it just so happens to have paved the way for operations against a longtime geostrategic foe that were being unfolded well before Trump’s arrival in the White House.

This is an excerpt from an article by legendary Australian journalist John Pilger from March 2016:

In the last eighteen months, the greatest build-up of military forces since World War Two — led by the United States — is taking place along Russia’s western frontier. Not since Hitler invaded the Soviet Union have foreign troops presented such a demonstrable threat to Russia.

Ukraine — once part of the Soviet Union — has become a CIA theme park. Having orchestrated a coup in Kiev, Washington effectively controls a regime that is next door and hostile to Russia: a regime rotten with Nazis, literally. Prominent parliamentary figures in Ukraine are the political descendants of the notorious OUN and UPA fascists. They openly praise Hitler and call for the persecution and expulsion of the Russian speaking minority.

This is seldom news in the West, or it is inverted to suppress the truth.

In Latvia, Lithuania and Estonia — next door to Russia — the US military is deploying combat troops, tanks, heavy weapons. This extreme provocation of the world’s second nuclear power is met with silence in the West.

This was all happening during the Obama administration. But he was still more doveish than the spooks and cold warriors who drive US foreign policy would prefer, resisting for example loud calls from the warmongers to arm Ukraine against Moscow and forcibly install a no-fly zone in Russia’s ally Syria.

The heir apparent to Obama’s throne, Hillary Clinton, did not suffer from such peacenik scruples. She’d already been making people on both sides of the aisle nervous with her anti-Russia hawkishness, and supported both arming Ukraine and installing a no-fly zone in Syria.

So these escalations were already underway, and more were being prepared for.

Then what happened? Somehow a political neophyte who’d been talking about making nice with Russia got in instead.

We suddenly found ourselves bombarded with narratives from the US intelligence community and its mass media stenographers about Russian election meddling and Trump playing some mysterious role in it. These narratives were pushed with steadily increasing frequency and shrillness, with the help of a humiliated Democratic Party that stood everything to gain by participating, until those of us who expressed any skepticism of them at all were being accused on a daily basis by MSM-brainwashed dupes of running psyops for the Russian government.

We were never at any time presented with any proof of these claims which rose anywhere near the level required in a post-Iraq invasion world, but we were hammered with them anyway, day in and day out, year after year.

This ended up putting a lot of political pressure on Trump to keep existing sanctions and military tensions with Russia, and he ended up adding dozens more new cold war escalations including further sanctions, shredded nuclear treaties, NATO expansionism and more. He even armed Ukraine due to these pressures, just like the anointed queen was scheduled to do.

For years, neocons and arms industry darlings like @RepAdamSchiff have sought to re-arm Ukraine and escalate the conflict in Donbas. By stirring up Russiagate, they finally got their deadly deal. My latest: https://t.co/pyJB4btOSk

The cold warriors wanted their escalations, and they got them. From beginning to the end, that’s all this was ever about. They pushed the narratives, the media joined in because it was great for ratings, and the Democrats joined in because it took the focus off their 2016 scandals and gave them a kayfabe phantom to punch instead of pushing for actual progressive changes.

And now the slow motion third world war between the US-centralized power alliance and the loose collective of unabsorbed governments is right on schedule, with Biden all set and ready to carry the omnicidal torch forward. The 2016 scandals are well enough forgotten, no progressive changes have been made, and there is no need to talk about Russiagate or impeachment at the Democratic National Convention.

Because everyone already got what they wanted. Everyone except ordinary people, of course.

Thanks for reading! The best way to get around the internet censors and make sure you see the stuff I publish is to subscribe to the mailing list for at my website or on Substack, which will get you an email notification for everything I publish. My work is entirely reader-supported, so if you enjoyed this piece please consider sharing it around, liking me on Facebook, following my antics on Twitter, throwing some money into my tip jar on Patreon or Paypal, purchasing some of my sweet merchandise, buying my books Rogue Nation: Psychonautical Adventures With Caitlin Johnstone and Woke: A Field Guide for Utopia Preppers. For more info on who I am, where I stand, and what I’m trying to do with this platform, click here. Everyone, racist platforms excluded, has my permission to republish, use or translate any part of this work (or anything else I’ve written) in any way they like free of charge.