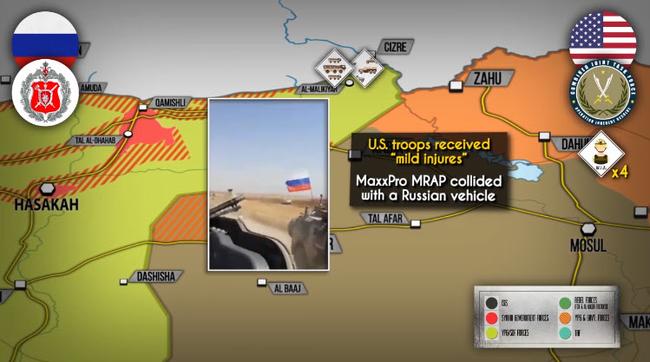 Four US service members were slightly injured during a standoff with the Russian Military Police near the border-town of Al-Malikiyah in the Syrian province of al-Hasakah. According to reports, the US troops received “mild injures” after their MaxxPro MRAP vehicle collided with a Russian vehicle. US officials quoted by media said there was no exchange of fire during the standoff, which took place earlier this week. According to their version of the events, a Russian vehicle intentionally rammed a US one.

Videos from the scene appeared online on August 26. They show Russian and U.S. armored vehicles chasing each other in the al-Hasakah countryside. A Russian helicopter was also filmed harassing U.S. troops that were trying to block a Russian patrol. Syrian sources say that Russian forces were reacting to attempts of the US military to block a Russian patrol in the area.

A few hours later, the Chairman of the US Joint Chiefs of Staff Mark Milley made a phone call to Chief of the General Staff of the Russian Armed Forces Valery Gerasimov, the Pentagon said. The US military did not provide details regarding the agenda of the phone call, but it is likely that the sides discussed the current situation.

Forces of the United States and Russia regularly find themselves engaged in various small-scale incidents in the area as both sides seek to block movements of each other in the region. After the first deployment of the Russian Military Police in Syria’s northeast, forces of the US-led coalition immediately started trying to block the movement of Russian patrols near al-Hasakah. Later, the Russian Military Police and the Syrian Army, with support of pro-government locals, joined this standoff by regularly blocking US military convoys and forcing them to return to their bases. The recent developments demonstrate that these actions may easily lead to a further escalation at any moment.

A group of pro-government fighters went missing near the town of al-Mayadin in the province of Deir Ezzor during the recent security operation there, according to reports by pro-militant sources. The missing fighters are reportedly members of the local National Defense Forces (NDF) and the Palestinian militia Liwa al-Quds. The NDF and Liwa al-Quds dispatched a large force with dozens of vehicles to the western Deir Ezzor countryside to search for the missing group, whose fate is yet to be revealed. Most likely, it was ambushed and eliminated by ISIS terrorists. A wide network of ISIS cells still operates in the Homs-Deir Ezzor desert. Russia says that these cells use the US-controlled areas in al-Tanf and on the eastern bank of the Euphrates to resupply its forces. The US rejects these claims as false.

The situation in southern Idlib remains relatively calm after the recent attack on the Russian-Turkish patrol. Nonetheless, the sides are apparently preparing for a new confrontation. On August 26, two service members of Syria’s 45th Special Forces Regiment were spotted with 9K32 Strela-2M and 9K310 Igla-1 MANPADs near the al-Zawiya Mount, close to positions of Turkish-backed militants. Apparently, these MANPADs will be employed against Turkish forces if Anakra once again opts to go offensive against the Syrian Army to protect al-Qaeda terrorists hiding in Greater Idlib.