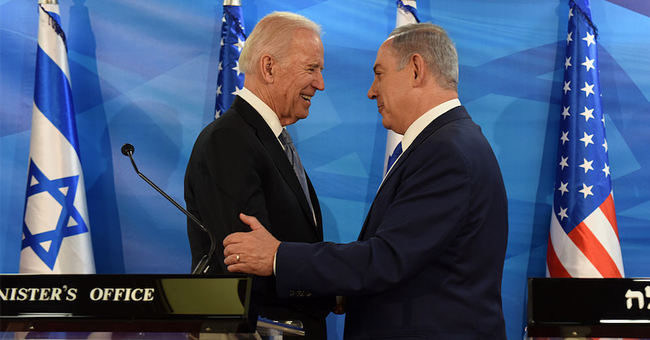 
Authored by Brett Wilkins via CommonDreams.org,

Democratic vice presidential nominee Sen. Kamala Harris told a group of Jewish donors Wednesday that a Joe Biden White House would not place any conditions on military aid to Israel, and that a Biden-Harris administration would continue the “unprecedented” military and intelligence cooperation with the Jewish state the country received from the Obama administration.

Haartez reports the California Democrat’s comments came during a virtual campaign call with donors in which she assured attendees that “Joe has made it clear he will not tie security assistance to political decisions Israel makes,” adding that she “couldn’t agree more” with that policy.

“The Biden-Harris administration will sustain our unbreakable commitment to Israel’s security,” Harris reportedly said, “including the unprecedented military and intelligence cooperation pioneered during the Obama administration and guarantee that Israel will always maintain its qualitative military edge.”

The Trump administration frequently touts the $3.8 billion in annual U.S. military aid to Israel as proof of its commitment to Israel’s security. However, the record $38 billion, 10-year aid package was drafted and approved in 2016, during Obama’s tenure. The White House at the time called the grant a “reflection of President Obama’s unshakeable commitment to Israel’s security.”

The Obama administration was often criticized by international human rights advocates for its unconditional support for Israel, which had launched three devastating wars against Gaza in 2008, 2012, and 2014, in which thousands of civilians were killed. Israel also faced growing international condemnation for its ongoing illegal occupation and settler colonization of the West Bank and East Jerusalem, as well as what prominent international critics have called ethnic cleansing and apartheid in the occupied Palestinian territories.

During the 2020 Democratic presidential primaries, there was an historic shift among candidates’ stances regarding Israel. For the first time, not only progressive candidates like Sen. Bernie Sanders (I-Vt.) and Sen. Elizabeth Warren (D-Mass.), but also more moderate ones like former South Bend, Indiana Mayor Pete Buttigieg said they would consider attaching conditions to Israel aid.

Biden has called the idea of conditioning aid to Israel “absolutely outrageous.”

One critic noted that the Biden-Harris stance falls “far to the right of” former President George H.W. Bush, who initially refused to approve a $10 billion loan to Israel over settlement expansion before ultimately backing down.

Harris has long been a supporter of Israel. In 2017, she met with Israeli Prime Minister Netanyahu one day after he announced a plan to expel tens of thousands of African migrants, who he called “infiltrators” who threatened the country’s “Jewish character,” from Israel.

At the same time, however, even some progressive Democratic lawmakers—most notably Reps. Ayanna Pressley (D-Mass.) and Ro Khanna (D-Calif.)—joined their Republican and moderate Democratic colleagues in supporting a bill that condemned the peaceful Boycott, Divestment and Sanctions (BDS) movement for Palestinian human rights.

Differences between the Obama and Trump administration on relations with Israel are often more stylistic than substantive. While right-wing politicians and pundits made much of some very public spats between Obama and Netanyahu, there was never any serious doubt that the U.S. would continue to staunchly support its closest Middle Eastern ally.

Today I met with Senator @KamalaHarris of California. We discussed the potential for deepening cooperation in water management, agriculture, cyber security, and more. I expressed my deep appreciation for America’s commitment to Israel’s security. 🇮🇱🇺🇸 pic.twitter.com/L5qdcgwWG0

It is true that the Trump administration has been exceptionally accommodating toward Israel, notably by moving the US Embassy from Tel Aviv to Jerusalem, and by withdrawing from the Iran nuclear deal. However, the current administration has continued its predecessors’ largely uncritical support for Israel, no matter how many human rights violations it commits, and regardless of world opinion.

Both the Obama and Trump administrations stood nearly alone in the world in vetoing United Nations resolutions condemning Israel’s illegal colonization, although Obama did abstain from a vote on settlements shortly before leaving office.

Speaking of Iran, Harris told the Jewish donors that a Biden administration “will not allow Iran to obtain a nuclear weapon,” an apparently superfluous statement given that U.S. and Israel intelligence officials have said since the early 2000s that Tehran is not seeking to build or acquire such weapons. Biden has signaled that he is interested in renegotiating the nuclear deal, with which all parties, including the Trump administration, agreed Iran was compliant.

“We will work with our allies… to strengthen and extend the Iran deal and push back against Iran’s other destabilizing actions,” Harris told the donors on the Wednesday call, which came as Israel continued its near-daily air and artillery attacks on what it says are Hamas targets in Gaza in repsonse to incendiary balloon attacks that have sparked wildfires in southern Israel.