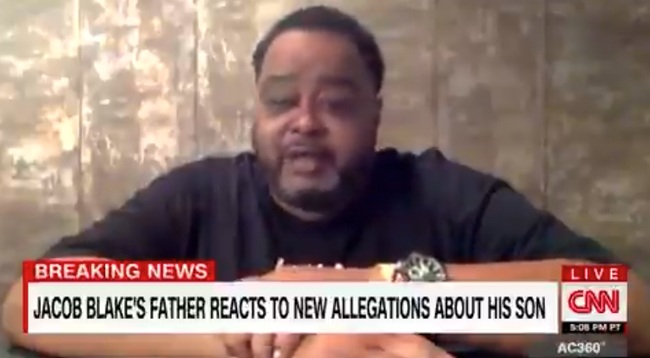 
As Jacob Blake Jr. remains handcuffed in a hospital bed, paralyzed from the waist down after he was shot seven times by Kenosha police last week, his father, Jacob Blake Sr., joined CNN’s Anderson Cooper on Friday for an interview.

Cooper asked Blake Sr. a series of questions during the interview about the incident, which involved his son and police officers. Some of Blake Sr.’s responses stunned the liberal-leaning news host.

Cooper asked Blake Sr. about the new narrative the Kenosha police union published late last week, alleging Blake Jr. fought an officer and had a knife before he was shot in the back seven times.

Blake Sr. responded to the question: “Some say Brussels sprouts taste good.” Cooper paused for a few seconds and said, “Umm, I don’t get the reference,” prompting Blake Sr. to say, “I hate Brussels sprouts.”

Cooper asked Blake Sr. another question: “Are you concerned with the police union giving details when authorities aren’t themselves? “

In another incoherent response, he said the union is “like a bunch of dudes that pay dues so they can go someplace and meet and get away from their wives.”

“He said ‘Dad, why did they shoot me so many times?'” said Jacob Blake’s father, recounting the hospital bedside conversation he had with son.

“I said son, ‘they weren’t supposed to shoot you at all,'” he told @andersoncooper. https://t.co/7ppTTV5Uvg pic.twitter.com/f3I98JwK21

Cooper then throws Blake Sr. a straightforward question: “When you saw your son in the hospital… he asked you why he was shot. Does he remember anything?”

Blake Sr. responds, “no, he didn’t ask me why he was shot – he said dad, why did they shoot me so many times?” Blake Sr. continued, “son, they weren’t supposed to shoot you at all.”

Cooper asked about Blake Jr.’s memories of the incident, and his father suggested his son understood why he was in the hospital riddled with bullet holes.

Blake Sr. said his son had a pain button on the side of his hospital bed: “Any time he was in pain, he would hit the button, and of course he would take the Starship ‘Enterprise’ to the Vega system.”

The last two minutes of the interview Blake Sr. denounced what he believes is two separate justice systems for whites and blacks, citing the police treatment of Kyle Rittenhouse, the teen who has been hit with six charges stemming from a Tuesday night bloodbath where he shot three men, killing two, during a night of chaos, anarchy, and looting.

Blake Sr. told Cooper, “you saw the white boy” who gunned down protesters in Kenosha, was “given a high-five” by officers while Blake Jr. was “given seven bullets,” and “if that’s not an example of two systems, then slap me and call me a woman.”