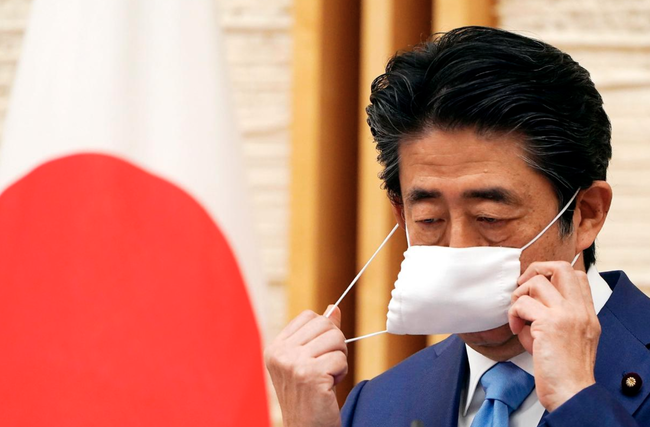 
Following repeated hospitalizations over the past few weeks stemming from a flareup of his chronic ulcerative colitis (which causes the PM to have explosive, difficult-to-control, bowel movements that must be controlled with medication), Japanese Prime Minister Shinzo Abe officially resigned Friday morning, marking the end of his reign – the longest of any postwar leader in the world’s third-largest economy.

Japanese stocks plunged on the news, with the Nikkei 225 falling from 23310 to 22678 within minutes of the first headline, before bouncing off the lows. Abe has no clear successor, and his resignation is expected to set off a heated contest for the premiership at a time when Japan is struggling from the delayed 2020 Olympics and a coronavirus outbreak that refuses to fade.

Party Secretary General for the Upper House of the Diet Hiroshige Seko said that Abe had decided to resign so his health wouldn’t “cause trouble.” The PM, whose term officially ends in September 2021, is expected to stay on until a new party leader is elected and approved by Japan’s parliament, the National Diet.

Abe famously and abruptly resigned from his first stint in office back in 2007 due to his health. But somehow, he made a political comeback years later and was reelected in 2012. Shortly after Abe’s victory in 2012, we predicted that “diarrhea” might be one of the main stumbling blocks of his tenure. And while we perhaps underestimated Abe’s staying power, it looks like, in the end, the prediction proved surprisingly prescient.

Abe’s decision to resign in 2007 set off a period in Japanese politics known as “the revolving door” as the country endured a series of PMs who served only briefly, until Abe was reelected in 2012. Abe has struggled with the chronic condition since he was a teenager and has said the condition was controlled with treatment. However, after his recent hospital visits were reported, top officials from Abe’s Cabinet and ruling party spoke out to say the PM badly needed time to rest.

He’s leaving on a decidedly low note for his rule, with his approval ratings at their lowest levels ever due to his handling of the coronavirus pandemic, along with the embarrassing flight from justice engineered by Carlos Ghosn, along with a slew of political scandals that have plagued the ruling party.

The PM’s legacy will have major consequences for the world’s third-largest economy, as the PM sought to combat a prolonged period of tepid growth with his “Abenomics” policy of ultra-loose monetary policy. Under his purview, the BoJ bought up government bonds and even Japanese equity ETFs at an alarming and unprecedented clip. But the “three arrows” of Abenomics – not only failed to stimulate inflation and boost exports via a weakened yen, but it has brought Japan’s banks to the verge of disaster, despite a recent improvement in bank lending.  The BoJ has already said that there will likely be “no change” in its monetary policy course now that Abe is gone.

Abe’s economic legacy is probably best represented by this chart.

At this point, policymakers’ focus is now more on keeping its banks on life support by paying them to boost lending, since Japanese banks can’t make any money with interest rates at current levels. To be sure, the literal wall of money printed by the BOJ in recent years has kept a lid on bankruptcies and job losses.

But the country’s prolonged battle with COVID-19 is only adding more strain to Japan’s regional banks, which can no longer survive without more life support from the BoJ.