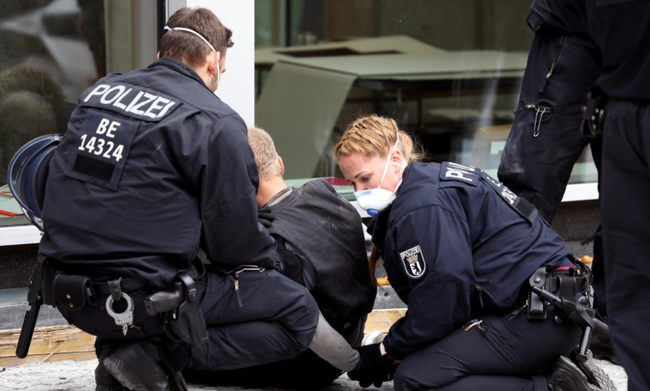 
It should surprise nobody that this happens first within the EU. While much of the world takes to mask-wearing more out of a social and health consciousness “most people are on board” type attitude, the government of Germany has announced fines as punishment for people not wearing them.

Chancellor Angela Merkel announced during a virtual meeting Thursday with state governors that almost the entire country will be under a 50 euros minimum ($59) fine for breaching the national mask mandate.

After the meeting it was announced that all federal states except the east’s Saxony-Anhalt agreed on setting a minimum fine.

In her comments Merkel also urged Germans to stay home “wherever it is possible” and avoid traveling to “hot spots” like the United States.

Berlin also agreed to impose a strict limiting on gatherings. Not only have many major public events been canceled outright, but police are enforcing a ban on private parties of more than 25 persons.

Large public events will not return until 2021. The new stringent measures including the mask fines go into effect by the end of the day Thursday.

This also as most German schools are now back in session, though there’s been a handful of closures due to new coronavirus cases.

It’s part of a broader initiative proposed by German health officials to crackdown on people flouting social distancing measures amid the pandemic, even though in recent weeks authorities say coronavirus clusters are due mainly to incoming vacationers.

Germany’s confirmed COVID-19 numbers have been on the whole relatively low compared to other Western nations, at about 240,000 out of a population of 83 million.