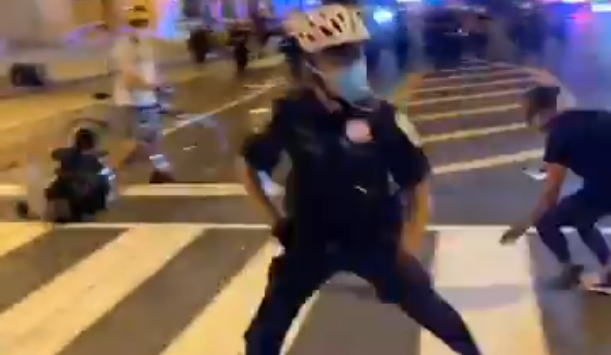 
Protesters in Washington DC clashed with police Thursday night and into Friday morning, as the last night of the Republican National Convention turned into a chaotic scene down the street from the White House.

Scenes from the east side of the White House #dcprotest pic.twitter.com/Cuwb5ptRbh

Earlier in the evening, protesters stood outside St. John’s Church chanting “If we don’t get it, burn it down.”

Protesters in front of St Johns Church chanting if “we don’t get it (justice) burn it down!” pic.twitter.com/KDq73c0Knj

After the GOP convention ended with a fireworks finale, BLM protesters began confronting attendees and had several altercations with the police.

BLM Terrorists causing chaos on the streets of DC tonight

A crowd swarms DC Police officers as they try to make an arrest near the White House #DC #DCProtests pic.twitter.com/c1kiIKqvmD

Senator Rand Paul and his wife were followed by a group of BLM protesters. After a man attempted to break through Paul’s police detail, the Kentucky Republican helped steady and officer who had been knocked off balance, before Paul’s wife began trotted down the street, pulling him by the hand.

Rand Paul just got chased by a crowd back to his hotel, after leaving the White House from Trump’s Republican Party Nomination #DC #DCProtests pic.twitter.com/h1kPcZG1jh

Just got attacked by an angry mob of over 100, one block away from the White House. Thank you to @DCPoliceDept for literally saving our lives from a crazed mob.

Former combat veteran Rep. Brian Mast (R-FL) was also harassed by a group of protesters who began to aggressively ask what he thinks of police killing black men in America, to which he replied that any killing was unfortunate. To the surprise of no one, they were not satisfied with his answer.

Another GOP Convention attendee and his wife were badgered as they walked down the street towards a parking garage.

Man and his wife leaving White House get mobbed on their way back to their hotel by livid protesters. pic.twitter.com/qnpPTfReS3

At one point, a bus full of RNC attendees was forced to turn around, only to have protesters jump onto it, and a woman open the rear door and jump inside.

A woman opened the back door of the bus of RNC attendees and hopped inside #RNCConvention2020 #DC #DCProtest pic.twitter.com/Uar2cVbk7y

Then, a white man in blackface showed up and a police chase ensued after a BLM protester appears to have punched him.

The Can Has Reached The End Of The Road