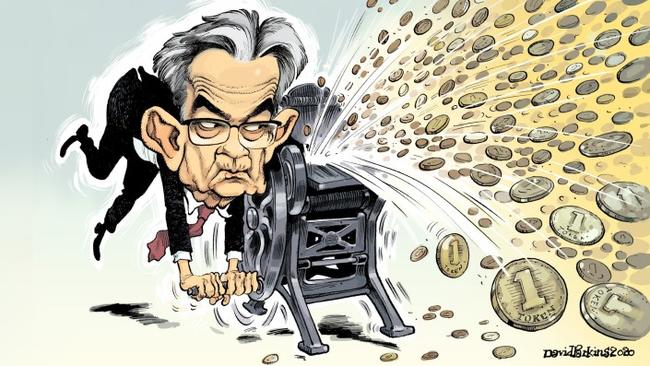 
Federal Reserve Chairman Jerome Powell is expected to reveal the conclusions of the central bank’s review of its monetary policy framework, and announce new measures to ‘control’ inflation – so-called “Inflation Averaging” at his annual speech on the U.S. central bank’s policy approach during the ‘Virtual’ Jackson Hole symposium this morning.

As Shard Capital’s Bill Blain notes, “this is going to be a profoundly significant moment” for all the Fed-Watchers who have spent years deciphering every syllable and nuance for signs of what policymakers will do next, because “this is basically the end of everything they have have been doing…”

“Although The Fed is going to continue with its 2% inflation target, instead of worrying about its price stability mandate, if inflation looks likely to go above their target, then ‘inflation averaging’ enables The Fed to ‘not’ react.”

Instead, Blain explains, “it will allow inflation to remain higher, for longer, i.e. averaging for the periods that it’s been sub-target.”

This is just words, Blain concludes, “it’s the meaning that’s more important – it means The Fed can ignore inflation and it is signaling that to the market… whioch means The Fed won’t hike rates if and when the economy overheats and inflation rises.

‘Inflation Averaging’ means “don’t worry about rate-hikes, or any normalization of rates, we are so desperate for inflation we are going to encourage it and we want markets to love it… it’s a way of reassuring markets that there’s never going to be another interest rate rise!”

All of which leads to Blain’s final words – “hedge! …with gold… for the inevitability of this all going wrong!”

And Powell is doing this despite a Fed study earlier this year warned that adopting a higher inflation target raises the risk of getting caught in “never-ending monetary accommodation even when real economic activity is strong or when financial stability risks accumulate.”

As Bloomberg’s Laura Copper adds, this time around, it’s central bank credibility that will be at stake with such a policy shift.

We saw this with the Bank of Japan in January 2013, when it adopted a higher inflation target in an effort to end chronic deflation — only to be met with disappointment.

Other potential pitfalls could revolve around policy mechanics. In a working paper published earlier this month on average inflation targeting, the San Francisco Fed noted that it will be challenging to determine how much inflation the central bank would want to see to consider it on target.

There’s also uncertainty over the extent that the Fed is willing to let inflation run hot and for how long — all of which could send mixed signals to the bond market and spur investors to demand greater compensation.

As Blain said – this won’t end well – got gold?

So, without further ado, watch Jay Powell live (starting at around 0910ET) explain how higher inflation for years to come is ‘good’ for America!!