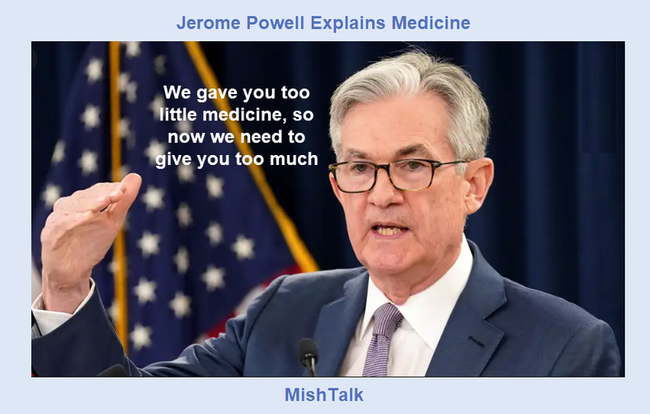 The Fed announced a new inflation policy today. It won’t improve anything.

Today the Fed issued an update to its Longer-Term Goals on Monetary Policy.

Fed chair Jerome Powell would not recognize price stability if it jumped out of the audience and spit grapefruit juice in his eye. Somehow the Fed is wedded to a goal of 2% inflation with no explanation as to why the goal should be 2% in the first place.

The idea that one can offset errors by further errors in the other direction is pure nonsense. It’s as if a doctor said “For the last three months we gave you too little medicine so for the next three months we will give you too much.”

Alternatively, think of it this way.

If you overcooked your turkey for the last two years, you don’t cook it this year to make up for it, https://t.co/uVSDqPVDkD

No Economic Benefit to Inflation

There is no economic benefit to inflation but there are winners and losers. The winners are those with first access to money, namely the banks and the already wealthy.

The Fed complains about income and wealth inequality but they are the primary source.

The BIS did a historical study and found routine price deflation was not any problem at all.

For a discussion of the BIS study, please see Historical Perspective on CPI Deflations

The problem is not deflation, it’s the Fed’s misguided attempts to prevent it.