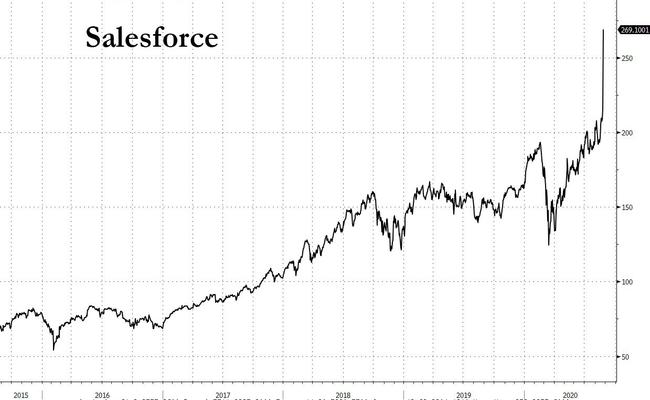 
With Saleforce stock exploding 25% higher today, one would think that some of the newly-found $48 billion in market cap would “trickle down” to its employees. One would be wrong.

Earlier today, Salesforce reported that revenue climbed 29% to a record $5.15 billion smashing expectations (even as the costs to generate that revenue jumped around 35%), and also boosted its full year forecast for annual sales, signaling that it is one of the companies benefiting immensely from the covid pandemic. Shares of the San Francisco-based company surged 25% on Wednesday in New York on the rosy projections, bringing gains for the year to 65%, and pushing its market cap to a record $243 billion.

As if that wasn’t enough, next week Salesforce’s stock will be one of the 30 making up the Dow Jones Industrial Average; it was added to offset the effects of Apple’s four-to-one stock split that would have given the information-technology sector a smaller representation in blue chip index.

So how does Saleforce celebrate the record riches of its shareholders and its promotion to the “Industrial” (in all but name) index? Why by informing 1,000 workers (via videoconference call of course) they would be fired.

In a vivid example of everything that is wrong with the Fed’s attempt to reflate the economy by inflating the biggest stock bubble ever, Salesforce would eliminate mostly sales and customer-support roles. As Bloomberg notes, “in the U.S., the move affects some workers who sell the company’s software aimed at financial-services firms, health and life-science companies and other cloud sales teams” with “some employees focused on Service Cloud, Salesforce Platform and configure-price-quote software also affected.”

Employees who were notified their job was being eliminated have 60 days to find a new role in the company, the WSJ added.

“We’re reallocating resources to position the company for continued growth,” a Salesforce spokeswoman said. “This includes continuing to hire and redirecting some employees to fuel our strategic areas, and eliminating some positions that no longer map to our business priorities. For affected employees, we are helping them find the next step in their careers, whether within our company or a new opportunity.”

It is somewhat ironic that on March 25, Salesforce CEO Marc Benioff pledged on Twitter that the company would avoid any significant layoffs for 90 days during the pandemic even as the company shifted to remote working. He called on other CEOs to follow him in a “no layoff” pledge.

6.Release workers who are ok.Develop plan for this with antibody titers to be on front line exposure positions.
7.Every ceo take a 90 day “no lay off” pledge.https://t.co/hwC6xme1QT everyone

Well, he did what he said: he waited a full 155 days before announcing the first mass layoff.