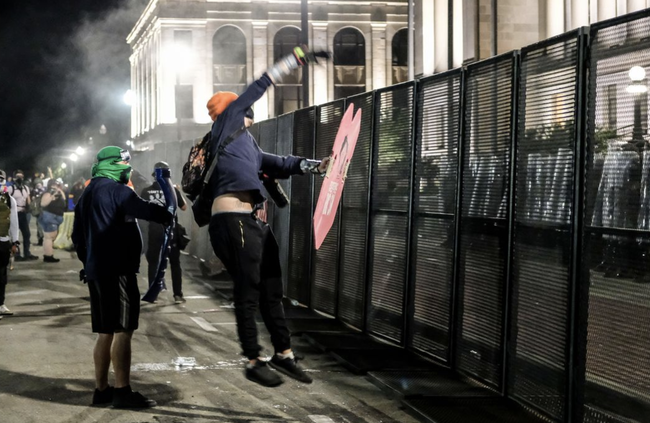 
Update (1030ET): A second cell phone video of the officer-involved shooting of 29-year-old Jacob Blake on Sunday has emerged, showing the incident in a slightly new light.

The footage showed Blake fighting with officers before he took off and ran to the driver’s door of his vehicle with police on his heels (video showed). The video suggests he may indeed have had a knife, and had ignored orders to drop it, before being shot.

It also suggested that Blake’s girlfriend lied to police when she claimed he hadn’t been hostile.

Another witness filmed part of the encounter between Kenosha police and Blake on his cell phone from across the street, but that video didn’t show any scuffle with police.

Update (0950ET): Kenosha County Sheriff David Beth held another press conference Wednesday morning to discuss the deadly shootings, and other crimes committed across the city during a third night of violence.

The Milwaukee Journal-Sentinel reported that police expect to make an arrest in a case stemming from the shootings “soon”, and that the FBI has been “assisting” local investigators, implying that the shooter will likely be taken into custody.

No one has been apprehended, but Beth said he believed at least one person would be taken into custody soon based on video footage police have reviewed.

“I feel very confident we’ll have him in a very short time,” Beth said.

Beth attributed the progress to the “resources” provided by the FBI.

The investigation of the latest shooting is being conducted by the Kenosha Police Department with the assistance of the FBI, Beth said.

“We’ve got a lot of resources that are helping us pull this stuff together,” Beth said of the shooting investigation.

Roughly 250 law enforcement officers and 250 National Guard members were on hand Tuesday night to try and quell the unrest, and property damage was much less intense during the third night of unrest – however, clashes between militia groups and hard-core progressive groups that resembled street violence appeared to play out in the streets of Kenosha.

Two of the three men who were shot in one photo

The shooting took place right in the heart of the city, according to  MJS.

The incident happened on Sheridan Road in the heart of Kenosha near the Froedert South hospital building. Many people were still on the streets in protest just before the shooting, walking up and down Sheridan Road, where protesters had been driven after being expelled from Civic Center Park.

Here are some more interesting tidbits from the report.

A Journal Sentinel reporter earlier in the evening observed a group of armed men with long guns standing guard at a dry cleaning business on Sheridan Road near 59th Street, some on the roof.

It is unclear if the men seen by the reporter were members of the Kenosha Guard, or whether Beth, in his comments, was referring to that group, or similar groups of people.

Before the shooting, someone from Kenosha suggested to Beth that he deputize ordinary citizens to help contain the unrest. Beth said he refused.

Already, the riots in Kenosha inspired by the police shooting of unarmed Jacob Blake, who was shot in the back while trying to enter a car with his children in the back seat (Blake was hit by 4 of the 7 shots, some reports said he had been armed at one point), have led to the deaths of at least 2 people.

Despite the governor’s decision to declare a state of emergency after a second night of violence, police and the national guard were once again largely absent in a stream of horrifying video from last night’s riots, which at times devolved into open street warfare between groups of rioters and armed people allegedly there to protect property.

Several videos of at least one of the fatal shootings flooded Twitter last night.

Guy in Kenosha got his arm turned to Swiss cheese chasing down a dude with an AR-15 pic.twitter.com/cwlHtAoZUA

While video of the other, allegedly involving the same shooter, who was confronted by several other armed citizens.

Extremely graphic: Someone at the #KenoshaRiots was just shot in the head. @livesmattershow was there to record it. pic.twitter.com/dH1t5M4AIK

Police confirmed to the press that they responded to two fatal shootings and at least one non-fatal shooting during the third night of protests inspired by the shooting of Blake.

Evers said he authorized 250 Wisconsin National Guard troops to protect critical infrastructure and assist Kenosha authorities, but once again, these reinforcements stayed clear of local businesses and offered almost no assistance in the protection of private property.

Kenosha officials said another 100 law enforcement officers from surrounding areas were brought in to assist local police. An 8pm curfew was in effect for the area.

“We will continue to work with local, state and federal law enforcement in holding those criminals who are destroying our city responsible,” Kenosha Mayor John Antamarian said in a statement.

And former NYC Mayor Rudy Giuliani had a response.

Kenosha, Wisconsin another city governed by pandering Democrats is burning to the ground.

There are already two dead, many injured and innocent lives and productive businesses that are destroyed.

Kenosha police said early Wednesday that they had responded to a report of multiple gunshots just before midnight. Authorities said two people were killed in the shooting, and a third gunshot victim was transported to the hospital with serious, a story that is more or less consistent with the videos we shared above.

An investigation into the shooting is reportedly ongoing. Kenosha County Sheriff David Beth told the NYT that police are investigating whether the shooting resulted from a conflict between demonstrators and a group of armed men there to protect local businesses. CNN reported that armed riot police fired tear gas and pepper spray into the crowd, while Blake’s family pleaded for calm on Tuesday.

One Twitter user shared what she alleged was an interview with the shooter (who can be seen above being chased by another man with a gun) from before the attack. In the interview he can be heard saying he is armed with live ammunition.

VIDEO: The alleged #Kenosha shooter was interviewed earlier in the night who stated he was there to protect property & was carrying live ammunition in his firearm. #KenoshaRiot#KenoshaUprising#KenoshaProtests#KenoshaShooting#KenoshaPolicepic.twitter.com/UJdBV5Uol4 https://t.co/MTrDMN086J

The protests have triggered gatherings of armed citizens, some of whom said they were protecting property against looting. Videos shared widely on social media have shown storefront after storefront ablaze, along with dozens of cars – rampant, indefensible, mayhem. And if the government won’t stop it – for whatever reason – sometimes people take responsibility into their own hands, which is one of the reasons the second amendment was enshrined in the constitution via the Bill of Rights.