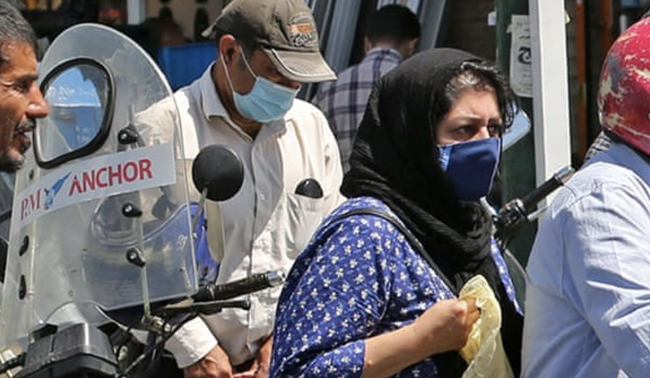 
As the coronavirus outbreak continued to slow in the Sun Belt, and across the US (even the northeast is seeing new lows in hospitalizations related to the virus), our attention drifted back to India and the Middle East on Wednesday, and Europe as well.

Lari added that 2,243 new cases were identified in the past day in Iran, rising from 2,213 a day earlier.

“Unfortunately we have been facing a surge in coronavirus infections in recent weeks. I urge everyone to avoid unnecessary trips,” Lari said.

We imagine Iran’s neighbors would prefer Iranians to stay home, too.

It’s not Oxford/AstraZeneca, but the University of Cambridge, which is running its own vaccine project, has some news on Wednesday: it’s due to start vaccine trials in the coming months after securing government funding for the project. Speaking of the British Government, PM Boris Johnson reiterated his stance on children returning to school on Wednesday by saying that staying home would do them “more harm” than returning to school and risking  a spike in coronavirus infections.

UK Education Secretary Gavin Williamson defended the Johnson government’s overnight U-turn on mandatory face masks in secondary schools, after declaring last night that headmasters would have the leeway to decide whether to require pupils to wear them.

“What we’ve always said…this would be something that we’d keep under constant review,” Gavin Williamson told Sky News. “Then when we issued the further guidance for the full return of schools in early July, again we emphasis the importance of keeping this area under review.”

As if Myanmar’s long-suffering Rohingya Muslim minority hasn’t suffered enough, Myanmar health authorities reported the country’s largest recorded spike in new COVID-19 cases on Wednesday. Most of the cases were recorded in Rakhine State, where much of the persecuted Rohingya population lives in densely populated camps.

In India, Delhi continues to struggle from a new rise in coronavirus cases despite surveillance data showing that 30% of the city’s residents may have already been infected with the virus.

However, this latest outbreak comes weeks after what appeared to be a successful effort to slow the spread.

Over the past day, 1,155 people have recovered, bringing the total to 147,743 patients who have recovered in the city so far. Delhi reported 17 new deaths bringing its death toll to 4,330.

After issuing new travel advisories targeting fellow EU members, Germany on Wednesday said it would scrap mandatory free coronavirus tests for returning travelers, a measure introduced earlier this month. Citing capacity constraints at its laboratories, Germany said the policy had been enacted hastily as a spike in new cases stoked fears of a comeback that has yet to emerge, though daily case totals remain elevated. Rules about mandatory quarantines for travelers, however, will remain in place.

Elsewhere on the Continent, bars and restaurants in and around Marseille will be forced to close at 11 pm local time starting Wednesday night and the obligatory wearing of masks will be extended to the entire city in France’s latest attempt to quell a recent upswing in new cases that has focused on the country’s two biggest cities, Paris and Marseille.

More than 23.9 million people around the world have been diagnosed with the coronavirus, and 15.5 million have recovered. More than 819,000 have died, according to data from Johns Hopkins University.