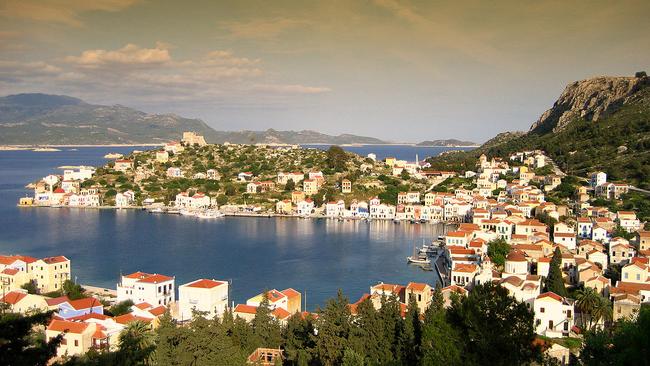 
Authored by Uzay Bulut via The Gatestone Institute,

The Greek Armed Forces are on high alert on land, sea and air, closely monitoring Turkish movements in the Eastern Mediterranean, according to Greek media. After Turkey last month restarted prospecting for oil and gas in an area overlapping Greece’s continental shelf, Greece deployed warships between the islands of Cyprus and Crete. Since then, tensions have run high between Turkey and Greece.

On August 12, Greek Prime Minister Kyriakos Mitsotakis warned about the possibility of an “accident” in the Eastern Mediterranean. Greek and Turkish naval forces deployed in the area after Ankara sent a vessel to conduct seismic research south of Kastellorizo.

“The risk of an accident lurks when so many naval forces gather in a limited area, and responsibility in such a case will be borne by the one who causes these conditions,” Mitsotakis said in a televised address.

Turkey has threatened to invade the Greek islands in the Aegean since at least 2018. A recent Egyptian-Greek maritime deal appears to have escalated Turkey’s regional aggression.

The maritime deal, which was signed on August 6, set the Mediterranean Sea boundary between Egypt and Greece. It also demarcated an exclusive economic zone (EEZ) for oil and gas drilling rights. The Egyptian-Greek move was widely seen as a response to a disputed agreement between Turkey and Libya’s Tripoli-based administration, according to the newspaper Kathimerini.

Meanwhile, Turkey has been systematically violating the territorial waters of Cyprus and Greece. In May, the foreign ministers of Egypt, France, Cyprus, Greece and the UAE issued a joint declaration “denouncing the ongoing Turkish illegal activities in the Cypriot Exclusive Economic Zone and its territorial waters, as they represent a clear violation of international law as reflected in the United Nations Convention on the Law of the Sea.”

On May 15, the European Union announced that it “condemned the escalation of Turkey’s violations of Greek national airspace, including overflights of inhabited areas, and territorial sea, in violation of international law.” But the condemnation has not stopped the violations by Turkey. On August 5, for instance, eight Turkish military airplanes carried out a total of 33 violations of Greece’s national airspace over the course of one day, Greek military authorities said.

After the deal between Greece and Egypt, Turkey again deployed a seismic research vessel to prospect for potential oil and gas reserves within Greece’s continental shelf. Greece has again placed its armed forces on high alert. Warships were sent to the spot between Crete and Cyprus, demanding the vessel’s withdrawal.

“They sent all terrorist organizations against us. We gave our response to these attacks in the language they understand through our operations in northern Iraq, Syria, Libya, and the Eastern Mediterranean. We gave [an answer] today too! We told them, ‘Look, don’t attack our Oruç Reis vessel. If you attack it, you will pay a heavy price’. And today they got the first answer.”

“No colonialist power,” Erdogan said on August 19, “can deprive our country of the rich oil and gas resources estimated to exist in this region.”

Turkey is a colonialist power that has been occupying Northern Cyprus since 1974. The Turkish government does not recognize the Republic of Cyprus as a state, and claims 44% of the Cypriot exclusive economic zone (EEZ) as its own. Another sizable section of that zone is claimed by the so-called “Turkish Republic of Northern Cyprus” in the island’s occupied north — recognized only by Turkey.

“Turkey has adopted a revisionist policy in the Eastern Mediterranean,” Dr. Giorgos Kentas, Associate Professor of International Politics and Governance at the University of Nicosia, said in an interview with Gatestone.

“Turkey’s policy is part and parcel of a broader strategy to expand Turkey’s influence in the Middle East, the Gulf, and Africa. The aim is to impose geopolitical dominion: an undisputed regional hegemonic regime whereby Turkey is be able to determine big and important developments. That revisionist policy is pursued by a mixture of soft and hard power instruments.

“With regard to Greece and Cyprus, Turkey clearly maintains an offensive posture. It appears willing to use military force in order to impose its revisionist plans. For almost two decades now, Turkey (under the leadership of Erdogan) has been developing a strategy to dominate over large maritime zones. [This] strategy is known as the ‘blue homeland’. It begins from the Black Sea and extends through the Aegean Sea towards the maritime zones of Libya, Egypt, Israel, and Syria. Turkey believes that Cyprus and Greece must voluntarily submit to the parameters of the blue homeland, otherwise they must face the consequences of its military might. Turkey plans against Greece and Cyprus under a strategic doctrine of a unified front.

“As of the early 2010s, Turkey started an illegitimate program of seismic surveys in the maritime zones of Cyprus, supported by considerable aeronautic forces. In May 2019, Turkey launched an offshore drilling program in Cyprus’ EEZ. So far it started and/or completed 7 drillings, at least one in Cyprus’ territorial waters. Turkey has actually de facto extended its military occupation of Cyprus from the land it occupies as of 1974 to island’s maritime zones. All that went mostly unanswered with the exception of some statements by third states and some symbolic sanctions by the EU.

“Turkey is currently attempting a similar policy of revisionism against Greece. The aim is to impose a hegemonic regime over Greece’s maritime zones and/or maritime zones that Greece claims in Eastern Mediterranean.

“Turkey has developed the military might, and acquired the means, to challenge and revise the geopolitical momentum created by a series of delimitation agreements between Cyprus, Egypt, Lebanon and Israel. [Turkey] also undermines the hydrocarbon program of Cyprus. Greece now tops the agenda of Ankara in the framework of the blue homeland dominium.”

According to Harris Samaras, an expert on the Cypriot EEZ and chairman of the international investment banking firm Pytheas, Turkey’s foreign policy in eastern Mediterranean is largely an extension of its Islamist domestic policies.

“Inspired by the 1979 Islamic Revolution in Iran, Erdogan and his Justice and Development Party (AKP) have pursued policies that furthered the Islamization of the country, promoting religion, fundamentalism, and limiting individual freedoms and rights. Turkey globally supports Islamism and jihadism as in the cases of ISIS, Hamas, Boko Haram, al Qaeda and the Iranian regime, among others. It is thus accurate to state that Turkey is today among the most anti-American and anti-European countries in the world. It operates as a polarized engine of religious radicalism with a global reach.”

According to Samaras, there are three main causes of Turkey’s aggression towards Greece and the general Turkish jingoistic behavior in the Eastern Mediterranean:

“1. Erdogan desires to lead the Islamic world, a project aimed at fulfilling his ambitions – and better regional supremacy complexes – to seize the Muslim world’s political leadership legitimated by consciously assuming the mantle as successor of the ‘glorious’ history of the Ottoman empire. ‘Turkey’, as Erdogan has repetitively stated, ‘is a continuation of the Ottoman Empire’. This infers that as its leader, Erdogan is analogous to the Caliph. Note here the similarities with statements by ISIS leaders.

“2. While the vast majority of European and US leaders from all parties, including the intelligence community and the Pentagon, recognize the reality of Turkey, certain EU leaders, US diplomats and appointees continue to apologize for and rationalize Turkish behavior. They dilute measures to hold Turkey to account. Their denial of evidence about Turkey’s regional malfeasance not only weakens the West and its credibility, but also benefits Russia, Iran and terrorism.

“Furthermore, and over and above, those elements who intentionally turn a blind eye to Turkey’s violations of the Rule of Law not only encourage Erdogan to intensify his bullying and jingoistic policies, but also pressurize Greece (like they do with Cyprus) to strike an energy and sovereignty ‘sale’ deal. This is contrary to international law and an attempt to delaying to convicting Turkey, eventually justifying its atrocities.

“3. Erdogan’s (and his AKP) popularity has slumped to the lowest level ever since his autocratic reign. This is a result of his systematic power grabbing, nepotism and corruption. The economy for one is in dire straits. Theatrics like the one with Hagia Sophia and the gunboat diplomacy in the Eastern Mediterranean, as well as bursts about the ‘tyrannical’ EU and Israel, are ‘required’ to direct the interests of his polarized compatriots elsewhere and away from the misery his foul administration has inflicted. Wrapping himself in a cloak of patriotism is part of Erdogan’s agenda and his regime’s propaganda narrative.

“Erdogan, however, is now anticipating that Chancellor of Germany, Angela Merkel, his best ally and in many ways his ‘accomplice’, will compel Greece into discussions. He is hoping that under Germany’s pressure Greece will ‘conform’ to selling part of its sovereignty. However, the Western world has to face and address the Turkish reality, the strategic reality that any possibility of a Western-leaning Turkey is gone.”

Meanwhile, the US State Department has issued a statement concerning Turkey’s activities in the region. “The United States is aware that Turkey has issued a notification to other ships of survey activity in the Eastern Mediterranean. We urge Turkish authorities to halt any such plans for operations and to and to avoid steps that raise tensions in the region,” a State Department spokesperson said on August 10.

“Turkish aggression against Greece is really nothing new,” Anna Koukkides-Procopiou, a Senior Fellow and Member of Advisory Board of the Center for European and International Affairs of the University of Nicosia, told Gatestone.

“For example, there have been myriads of air space violations in recent years. Turkey is just taking everything to a different level nowadays. This gradual tension spiral, first, aimed at testing the waters, both literally and metaphorically. But Greece has proven it will not go quietly, despite Turkey trying hard to set a maximalist agenda on its own terms, before negotiations ensue at some point. Turkey considers her use of force both a carrot and a stick for Greece to succumb to its claims.

“Second, there is no doubt that all the neo-Ottoman, anti-Lausanne rhetoric which Erdogan and his ministers have been making good use of should be taken seriously. It is part and parcel of a hegemonic bid to master regional leadership, as well as an attempt to woo audiences at home. An authoritarian ruler reigns by bread and games. Bread seems to be running out in Turkey at the moment, so there also needs to be a focus on games.”

As for what the Europe and the US should do in the face of continued Turkish aggression, Procopiou said:

“There has been enough talk and little action. If Europe and the US are serious about halting Turkey’s aggression, they need to show that they mean business. Europe keeps feeding Erdogan money while he is making a spectacle of democracy, international law and human rights. [These are] fundamental values which the European Union supposedly stands for.

“In essence, Erdogan has been ridiculing the EU, NATO and the US with zero consequences. Why should he stop? If the only reaction he gets is a shamble of a sanctions list in Europe – with only two inconsequential individuals’ names on that list – and no enforcement of the American CAATSA [The Countering America’s Adversaries Through Sanctions Act], he is taking everyone for a ride. So, we could begin at least with that. The Turkish economy found itself on its knees last time US President Donald Trump cared to send Erdogan a message over the arrest of American Pastor Andrew Brunson. What is keeping President Trump from doing that now?”