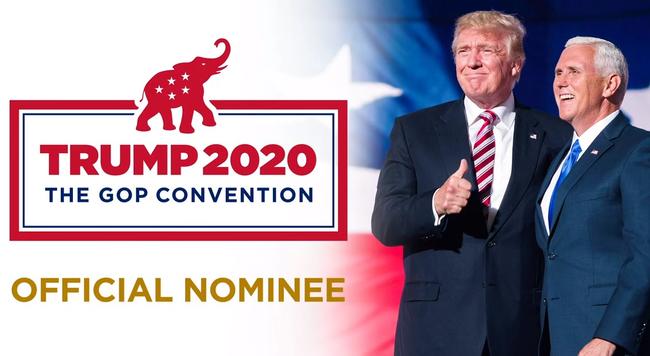 The GOP says the convention will contrast with the Democrats’ largely taped gathering last week by featuring more live events with audiences from Washington and around the country. White House counselor Kellyanne Conway said it would feature “people whose lives have been impacted and measurably and consequently changed due to the efforts and policies of President Trump.”

The theme of tonight is “Land of Promise”:

Today our delegates have gathered in Charlotte, North Carolina for the 2020 Republican National Convention to formally re-nominate President Donald J. Trump and Vice President Michael R. Pence. This convention amplifies President Trump’s promises and the unbreakable hope of the American people. Together, we are upholding the longstanding American tradition of a party convention with the promise of making history.

As Americans have for every challenge in our 244-year history, when struck by the heartbreak of this pandemic, countless patriots answered the call and promised to protect and serve their fellowman.

Our health care professionals and first responders have been miracle workers through their unyielding resolve and selfless compassion. Our essential workers — grocers, farmers, teachers, transportation workers and countless others — are courageously keeping this country running. Our American business owners have innovatively made PPE, taken drastic steps to stay or re-open and have taken care of their employees in unprecedented ways. Our families have navigated unchartered territory as working parents have sought creative solutions for childcare and alternative schedules that prioritize the safety of their loved ones. Our local law enforcement and American soldiers have continued putting their lives on the line to protect us.

The men and women of our nation are standing in the gap for their brothers and sisters as they lift up the hurting and care for their neighbors, and they deserve a leader who will promise to stand in the gap with them over the next four years.

Today, we celebrate the re-nomination of an American President who will be remembered in history as the one who kept his promises and paved a way forward even in the most challenging of times. The land of promise remains the United States of America, and with President Trump leading her people, we always will be.

Donald Trump Jr. and Sen. Tim Scott headline the first night of the Republican National Convention, which kicks off at 8:30 ET p.m. tonight.

And President Trump reportedly plans to speak every night.

Building on the incredible achievements of President Donald J. Trump’s first term in office, the President’s re-election campaign today released a set of core priorities for a second term under the banner of “Fighting for You!” President Trump’s boundless optimism and certainty in America’s greatness is reflected in his second-term goals and stands in stark contrast to the gloomy vision of America projected by Joe Biden and Democrats.

President Trump will further illuminate these plans during his acceptance speech Thursday at the Republican National Convention. Over the coming weeks, the President will be sharing additional details about his plans through policy-focused speeches on the campaign trail.

President Trump: Fighting for You!

END OUR RELIANCE ON CHINA

INNOVATE FOR THE FUTURE