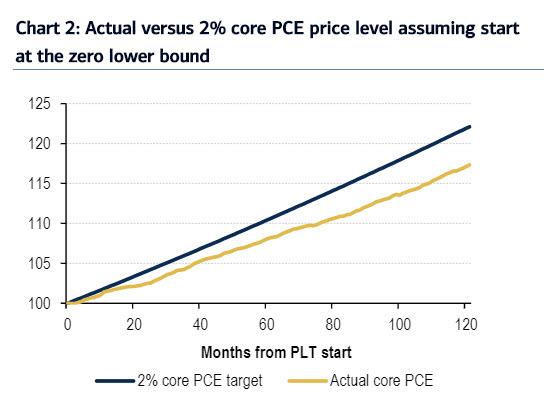 
The media and markets are on high alert ahead of Thursday’s virtual “Jackson Hole” symposium (which this year will be held via webcast), whose highlight will be Jerome Powell speech titled “Monetary Policy Framework Review” and which wraps up an examination which started in early 2019 among both among central bank officials and the public, during a series of open events, on what policy should look like in the future. It will be, as CNBC puts it, a “profoundly consequential” speech, changing how the Fed views inflation, and specifically will outline the central bank’s most active efforts ever to spur inflation back to a healthy level.

Putting aside the fact that inflation as measured by the CPI and its often grotesque hedonic adjustments, has been for the past three decades politically suppressed at the CPI level precisely to allow the Fed enough buffer to conduct the loosest monetary policy possible without hitting political interference for running the economy “hot” (as discussed in “The Politics of Inflation“,  “The Muzzle on Inflation” and “Lessons from the 1980 “Inflation” Virus“), there has been speculation that as part of its framework overhaul, the Fed may need a new working definition of inflation, ideally one which captures the dramatic divergence between runaway inflation in asset prices (bad inflation) on one hand and muted wage pressures and real economy prices (good inflation) as shown in the chart below.

But even without a comprehensive overhaul of how inflation is measured, the market appears convinced that average inflation targeting (AIT) could be announced on Thursday with new a policy formally adopted on the 16 September FOMC meeting. As such, Powell will likely give an overview of the coming changes, the thinking behind them, and why other options such as negative interest rates and yield curve control might remain on the back burner for future consideration.

So will Powell formally unveil AIT? Well, according to a new report from Bank of America, Powell won’t go that far, and will fall short of formally adopting AIT, instead acknowledging that a period of inflation overshoot is necessary to produce an average inflation rate of 2% over a cycle. This, according to BofA’s Ralph Axel “could take the form of officially changing the 2% inflation target to a range of 1.5-2.5%, or codifying that it will officially seek periods of inflation overshoots on the order of, say, 50-100bp to achieve its 2% goal on average through the cycles.”

To be sure, Fed officials have recently supported overshooting the target: in July, Governor Brainard said “refraining from liftoff until inflation reaches 2 percent could lead to some modest temporary overshooting, which would help offset the previous underperformance.” Others were just as vocal: Chicago Fed President Evans recently noted that the Fed did not need to raise rates until inflation headed to 2.5%. Dallas Fed President Kaplan would be willing to let inflation rise to the order of 2.25-2.3%, and St. Louis Fed President Bullard pointed out that there was greater sympathy at the Fed for overshooting 2%.

So why not an explicit AIT policy? Because according to BofA, that would entail picking a specific time period over which PCE inflation is required to average 2% before beginning a policy normalization (hiking) process. This is a problem, because in simulations conducted by the BofA rates team, it found this could in require the Fed to remain on hold for 42 years!

Alternatively, the Fed can “simply” supercharge core PCE to 4% annually and reach its target in just 2 years, but by the end of that period the Marriner Eccles building would have burned down as the anti-inflation riots finally set their sights on the true target.

Just as importantly, explicit AIT could also cripple the Fed’s already waning credibility, not least of all because “it would also bring up difficult issues around the appropriate time period to calculate averages and the maximum realized inflation rates the Fed would tolerate while the average climbs higher.”

Ultimately, BofA concludes that an explicit policy of AIT could greatly complicate both Fed communication and logistics. This would risk a reduction in the Fed’s credibility, which is already vulnerable given:

Then there is the question of just what mere “forward guidance” and jawboning can do when the Fed is already at the limit of its firepower, and according to some has even crossed into illegal territory by purchasing corporate bonds. In other words, as Axel cautions, “the market is overhyping the Fed’s ability to change the course of inflation in the future, under any policy.” Here’s why:

To begin with, interest rates are already close to 0 across the entire Treasury curve. The principle of monetary easing is to increase aggregate demand by lowering the cost of funding, theoretically increasing borrowing for spending and investment. But at the current low rates, even if the Fed were to set all Treasury rates to 0bp, how many new borrowers and spenders would emerge? This is the problem of the zero lower bound that has worried the Fed and other central banks for years. The incremental ability to ease, without adopting deeply negative rates, is limited.

More important than even the Fed’s limited firepower to lower interest rates under a new framework is the fact there are larger structural forces outside of the Fed’s control that have an arguably larger impact on inflation and inflation expectations. Here a full list would include:

While all of these factors remain in flux, and while some are arguably changing directions (for example, de-globalization may become a new trend), BofA concedes that it is unlikely monetary policy of central banks is the main driver of inflation. In addition, as the next chart from BofA shows, 81% of the variance in inflation measures across the US, Europe, and UK are explained by a single factor, which implies inflation is driven by global forces.

So where does that leave the Fed, which has on more than occasion called inflation a “puzzle” in recent years. Former Chair Yellen in one of her last speeches as Fed chair noted that our understanding of inflation may be flawed by models that are misspecified and our inability to predict trends in sectors such as health care and housing which are large components of the price index. More notably, the complete breakdown of the Phillips curve, inversely relating unemployment rates to wages, has long mystified the Fed and has caused them to rethink long-held concepts such as NAIRU (the non-accelerating inflation rate of unemployment).

In summary, Bank of America believes that the market is putting too much stock into the Fed’s power to increase inflation expectations, i.e., to widen breakevens between TIPS and nominal Treasuries, with a change in its official policy framework. It’s also why the bank has exited its long breakeven position “no longer see wider breakevens as offering any added value over a simpler short duration position.”

As the chart above show, breakevens are now where they were when the Fed was actively tightening monetary policy (something which we know won’t happen for a long, long time) and just below the long-term average from before the financial crisis of 1.90%; Meanwhile breakevens face other hurdles: as BofA explains, “if rates rise, which would likely be the case if an effective vaccine became available, we would expect breakevens to widen along with rates based on their historical betas. And the opposite would be true if the downturn becomes longer and deeper than anticipated with both rates and breakevens falling.”

But the punchline is that the bank’s rates team does not expect a structural widening of breakevens or curve steepening to come merely from the Fed’s announcement on policy framework changes; in fact it is quite likely that much if not all of the Fed’s AIT is already priced into the market and if anything breakevens will slide as the news is sold.

In conclusion, BofA suspects “the market bar is too high for the Fed to deliver on its new framework, and breakevens may be poised for a short-term decline around Jackson Hole” especially since the Fed remains unwilling to adopt game-changing policies such as negative interest rates or price/GDP targeting. For that to happen, a new and even more powerful market crash would be necessary but that’s a topic for another article.