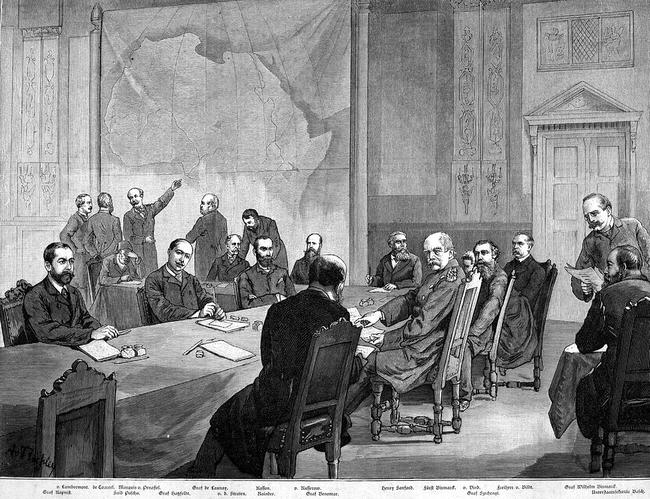 
Authored by Amir Taheri via The Gatestone Institute,

“The world has stepped into a slippery patch, and we need to steady it.” This is how Benjamin Disraeli saw the international scene in the early 1880s.

André Maurois, the French biographer of the British Prime Minister, claims that Disraeli had become aware that the British Empire could no longer rule the waves alone and that others had to be invited to the banquet of global power. That analysis led to the convening of the Berlin Conference which, starting in November 1884, continued until February 1885.

The British trick was to site the conference in Berlin and flatter Otto von Bismarck, Germany’s “iron chancellor”, into believing that, as the new strongman in Europe, he was running the show. Bismarck, the arch warmonger, was cast as peace-maker trying to temper rivalry among European colonial powers.

Still smarting from its humiliating defeat by the Prussians a decade earlier, France was the other “great power” present, along with the ailing Austro-Hungarian empire. Also invited was Russia, still licking wounds inflicted by its defeat in the Crimean War. The newly independent Italy and the Ottoman Empire, labeled the “sick-man of Europe”, were also given seats at the banquet table.

Smaller players like Spain, Portugal, Belgium, Holland, Denmark and Sweden (which then also included Norway) received tripods at the table. The surprise guest was the United States, the only power not involved in the colonial game but already seen as a contender for world leadership.

While the conference was focused on carving up Africa, more specifically the Congo, it also offered implicit endorsement of the zones of influence established by European colonial powers, while the US achieved recognition of the Monroe Doctrine (1823) that restricted European empire-building activities in the New Hemisphere. The compromise reached in Berlin kept the peace until the First World War.

The question now is whether we need another Berlin conference to reconcile conflicting ambitions that are fomenting instability and war in several regions.

Today, as in the 1880s, big, small and even mini wannabe empire-builders are engaged in a ruthless power game.

The most intense activity comes from Russia and China.

Having recovered from its nightmarish Soviet experience, Russia is reverting to nationalistic ambitions that inspired the conquering tsars for centuries. Russia has annexed territories from Ukraine and Georgia and casts itself as master of Syria’s destiny. It is also trying to carve a zone of influence in Libya while waging what looks like lukewarm war against Western democracies. Using the concept of “near neighborhood,” Russia projects political and at times military power in Transcaucasia and Central Asia. Russia is also treating several countries, notably Serbia and Iran, as glacis in its non-declared empire-building project.

Western powers are beginning to wake up to the new Russian threat, at times with exaggerated rhetoric. A prestigious British weekly, for example, devotes its cover to what it calls Russia’s “plan to destroy Western civilization”. As in the 1950s, when people saw “reds under the bed”, some in the West detect a Russian hand in everything, including Brexit and American presidential elections.

China, for its part, is projecting power all over the world while bullying some neighbors and bribing others into submission. When deemed necessary, it also acts with military force, as it did recently along the ceasefire line with India. China treats some African, Asian and Latin American countries, notably Congo-Kinshasa, Ethiopia, Afghanistan, Pakistan, Iran and Ecuador as abatis or territory left by previous masters and open for pickings by new reapers.

As in the 1880s, today we also have midget empire-builders.

Turkey is trying to carve out a piece of Syria, and, talking about a revision of the Treaty of Lausanne (1923). It hopes to snatch part of Iraq. It is also projecting power in Bosnia-Herzegovina, Kosovo, north Cyprus, Azerbaijan and Qatar.

Iran is also trying to stay in the game, either through proxies and mercenaries as in Iraq, Syria, Lebanon and Yemen, or as Sancho Panza to Russian and Chinese Don Quixotes.

For its part, India has imposed hegemony on several neighbors, notably Nepal and Bhutan, while finalizing annexation of the disputed part of Jammu and Kashmir.

Overall, in economic, political and even military terms, Western powers, still nominally led by the United States, remain involved in all continents but are increasingly behaving as if their hearts, not to say their pockets, are no longer in it.

Under Presidents Barack Obama and Donald Trump, the US has flirted with isolationism without, however, abandoning front-stage.

Among European powers, France is still active in parts of Africa, including a mini-war against militants in the Sahel. More recently, France has also tried to claim a role as protector and savior of a Lebanon on the edge of systemic collapse.

As for Germany, it seems that its hapless Foreign Minister Heiko Maas has no ambition beyond caressing the corpse of the Obama “nuclear deal” with Iran.

Despite claims that Brexit would allow Great Britain to seek a broader international role, there are no signs that the new leadership in London is capable of developing a global strategy even as a medium-sized power.

The European Union may be an economic giant but remains a political dwarf in terms of global power, a fact borne out by its choice of a fifth-rate diplomat as foreign policy point-man.

The current lukewarm war may never morph into a hot one, but the risk should not be dismissed. Today, projecting power with low-intensity war, often waged through inexpensive proxies as Iran does in Lebanon, or through mercenaries as Russia does in Syria and Libya, enables even relatively poor countries to cast a larger shadow than they deserve. While a full-scale conventional war is too expensive for most nations, fairly inexpensive down-market war via roadside bombs, terrorism, hostage-taking, missile fireworks, cyber-attacks and drone strikes are available even to semi-solvent powers such as Iran and North Korea.

A new Berlin Conference may be needed to cool things down and construct a new rule-based international order. But at a time that even the next G-7 summit may not take place, who is going to take the initiative?