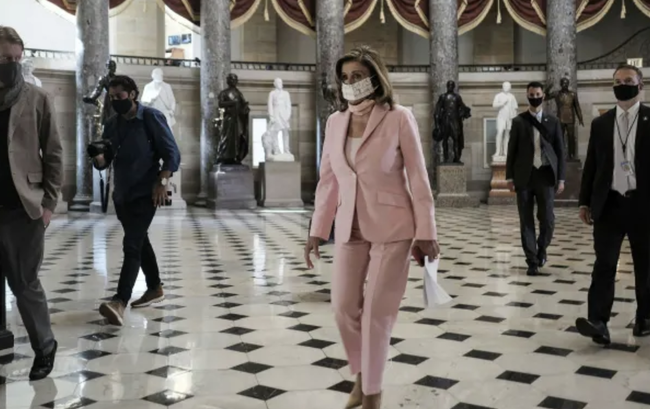 
Despite the fact that Postmaster General Louis DeJoy has delayed his most controversial cost-saving measures until after the November vote, and endured a shellacking at the hands of Senate Democrats on the Homeland Security Committee, House Speaker and Democratic leader Nancy Pelosi forged ahead with the help of 26 defecting Republicans to pass a bill calling for $25 billion in financial assistance for the Post Office.

As more states announced plans to hold their elections largely by mail in November (a system that some used for the primaries) the Postal Service announced earlier this month that too much voting by mail could delay the arrival of some votes. Pelosi called a special session of the House during recess and on a Saturday to lend this piece of political theater even more impact.

The vote is the culmination of a Democratic crusade about late mail – literally, a few people complained about their mail being late, a few others posted some context-free photos of mail sorting machines being destroyed, and – boom – Democrats suddenly had an army of twitter trolls shrieking about veterans dying because their medication came a day late. One Connecticut family even complained that USPS had lost the cremated remains of a loved one and veteran (they were found 12 days later thanks to one dedicated worker who supposedly delivered the remains personally). They blamed DeJoy personally for the mistake, and ever since, the state’s AG William Tong has seized every opportunity to draw attention to “out of service” mail sorting machines.

DeJoy is due for round two before the House Oversight Committee on Monday, which should be even more brutal than Friday’s pile-on (at least, for DeJoy’s sake, the Senate is controlled by Republicans).

But in the latest transparent bit of political theater organized by “political mastermind” Nancy Pelosi – and surely this is right up there with her wardrobe choices during the unveiling of the Dems’ police reform bill  – is the victorious vote on Saturday, which has almost no chance of passing the Republican-controlled Senate.

As we mentioned above, 26 Republicans defected to help Democrats pass the bill 257 votes to 150. In addition to the money, the bill called for reversing certain operational changes imposed under DeJoy. Six states are also suing USPS and DeJoy personally (along with the chairman of the USPS board) claiming these changes infringe on states ability to hold free and fair elections.

House Oversight Chairwoman Carolyn Maloney, who introduced the bill, has said the postal service should not “become an instrument of partisan politics.”

….that they are trying to pull off in violation of everything that our Country stands for. Vote NO to the Pelosi/ Schumer money wasting HOAX which is taking place now. Then fight the $51 million unasked for Ballots. Only ABSENTEE BALLOTS are acceptable!

Now, get ready for some strongly worded statements from Pelosi when Mitch McConnell inevitably refuses to call it for a vote. The Senate has introduced its own, scaled down, plan to help USPS as part of a proposed COVID relief bill that thanks to Democrats, likely will never become a reality.