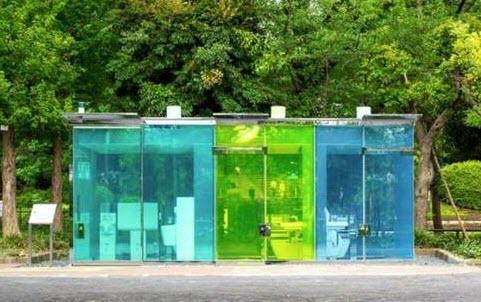 
Having finally solved the grand monetary policy puzzle, Japan has now moved on to other crucial societal problems, like getting people to feel comfortable using public toilets.

At least, that was the thinking behind Tokyo’s new transparent public toilets: to help ease “toilet anxiety”, according to Forbes.

That’s why the non-profit Nippon Foundation has now launched “The Tokyo Toilet Project”, which has asked 16 well known architects to renovate 17 public toilets located in one of the busiest areas of Tokyo, the public parks of Shibuya.

The idea was to apply a design that would make public bathrooms comfortable and accessible to everyone. The Nippon Foundation has a goal “that people will feel comfortable using these public toilets and to foster a spirit of hospitality for the next person.”

Pritzker Prize-winning architect Shigeru Ban is the brain-child behind the transparent restrooms. The smartglass they are built with turns opaque when someone is in them. The Nippon Foundation commented: “There are two concerns with public toilets, especially those located in parks. The first is whether it is clean inside, and the second is that no one is secretly waiting inside.”

“At night, they light up the parks like a beautiful lantern,” the Foundation concluded.