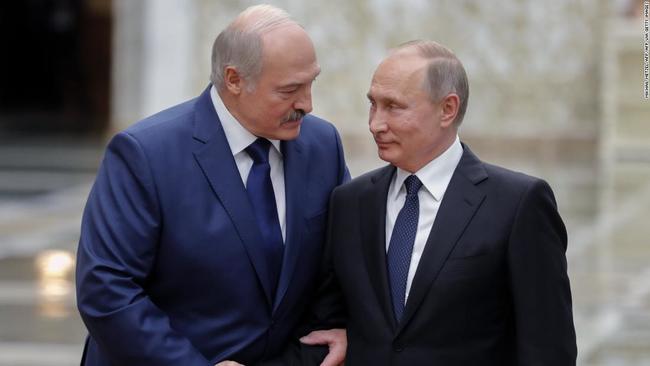 
Days ago the European Union declared that it would not recognize Alexander Lukashenko’s reelection as Belarus’s legitimate president following mass protests which have gripped the nation for weeks on charges of a “rigged election” and led the 26-year ruler to threaten calling upon Russian military aid.

European council president Charles Michel said Wednesday, “The European Union stands in solidarity with the people of Belarus,” further condemning the Aug. 9 presidential elections as “neither free nor fair and did not meet international standards”, he said. “We don’t recognize the results presented by the Belarus authorities.” The statement was issued following an emergency meeting of EU’s 27 leaders over the rapidly moving events in Belarus. Sanctions targeting the Lukashenko government were also introduced at a moment the embattled leader said he moved troops to the western border, warning supporters that “NATO troops are at our gates. Lithuania, Latvia, Poland and our native Ukraine are ordering us to hold new elections.”

All of this led to Lukashenko most direct accusation yet that the swell of domestic anger and unrest against him is ultimately a foreign plot akin to prior “color revolutions” in Eastern Europe and the Baltics.

According to his comments in state-run Belarusian BelTA news agency on Friday:

“The US is planning and directing it, and the Europeans are playing along,” he said, adding that “a special center” has been established near Warsaw. “You know, when there is unrest nearby and tanks and planes begin to move, this is no coincidence,” the president pointed out.

He cast the unrest as ultimately an attempt to sever Belarus as the key “only remaining link” in “Baltic-Black Sea corridor” which includes Ukraine.

Both domestic and international pressure has mounted for him to step aside in favor of political rival and main presidential opponent Svetlana Tikhanovskaya, who came in second with results showing 10.12% of the vote, but forced to flea to Lithuania where she’s attempted to rally the people. There has also been growing demands to hold a new vote under international monitors.

But the embattled president vowed earlier in the week: “We held the election. Until you kill me, there will be no other election.”

Two months ago @MoonofA published an article titled “Belarus — A U.S. Sponsored Color Revolution Is Underway” documenting all the telltale signs that the Moscow-aligned nation would soon be overrun with protests in opposition to its Soviet-style government. Here’s an excerpt: pic.twitter.com/VszT1mJq7Q

Meanwhile, color revolution accusations and suspicions notwithstanding, there’s consensus that the Kremlin doesn’t appear wedded enough to Lukashenko to strongly intervene an any visible scale, but would likely draw the line if his fate was to be dictated from the outside or external interference in a crisis increasingly drawing in more overt signaling from the US and Europe.