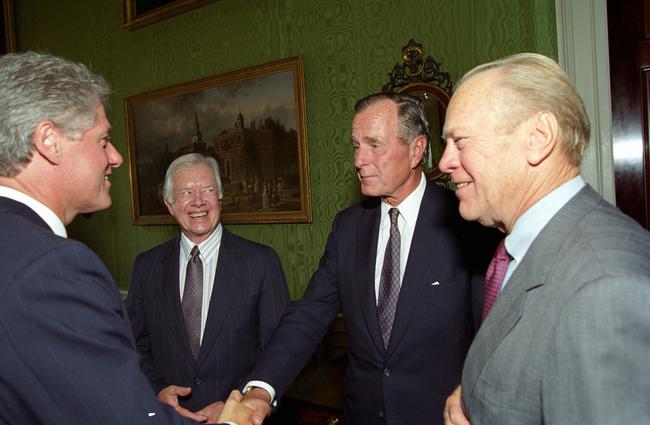 
Authored by Myra Adams via RealClearPoliticsa.com,

Since the end of World War II, there have been 18 U.S. presidential elections, 11 of which involved incumbents. Eight of those presidents won reelection, demonstrating the power of incumbency.

Conversely, the familiar tag line “past performance does not guarantee future results,” heard at the end of financial ads, is equally applicable. Subjected to that devastating truth were the last three one-term presidents – Gerald Ford, Jimmy Carter, and George H.W. Bush, all forced to join the “exclusive club” Donald Trump is fervently trying to avoid.

Examining the failed reelection campaigns of 1976, 1980, and 1992 may offer lessons for the current Oval Office occupant.

Why Ford Lost: First, he was an unelected incumbent, and his unpopular pardon of disgraced predecessor Richard Nixon dogged his campaign. (Over the years, however, the pardon decision was viewed more favorably.)

Second, Ford presided over what was perceived as a lackluster economy with high unemployment/inflation and slow growth. In the same vein, Ford’s much-derided Whip Inflation Now initiative still ranks high among domestic policy blunders. (During my after-school job as a Woolworth’s cashier, management pinned a WIN button on my blouse.)

Third, the dramatic fall of South Vietnam occurred on April 30, 1975. The helicopter evacuations from the roof of the U.S. Embassy in Saigon left a devastating image that not only stained Ford’s administration but negatively impacted American foreign policy for decades.

Fourth, even with the economy showing signs of improvement in 1976, Ford could not escape the general feeling that voters thought it was time to put the calamitous Nixon/Watergate/Vietnam years in the rearview mirror.

Enter Jimmy Carter, a little known one-term governor and peanut farmer from Georgia. He was positioned as an unblemished “outsider” when Washington’s leadership represented scandal and failure at home and abroad. With the slogan “A Leader, for a Change,” Carter parlayed that prevailing national attitude to his advantage, while famously saying, “I will never lie to you.”

A similar “time to move on” national attitude must be messaged against, but in a positive, unifying way.

Why Carter Lost: A majority of Americans had come to the conclusion that he was a weak leader who was not up to the task.

All of the above was coupled with seemingly out-of-control international events perceived by voters as rooted in flawed presidential leadership responsible for America’s diminished global standing. The national ego was battered by the Iranian hostage crisis, including a deadly desert rescue debacle;  Russia’s invasion of Afghanistan; and America’s absence at the 1980 Moscow Olympics.

The stars were aligned for two-term former California Gov. Ronald Reagan to win in the greatest landslide since Franklin Roosevelt’s 1936 reelection. Reagan presented himself as a strong, principled leader with an optimistic vision of the future. Contributing to Reagan’s success was an ability to connect with Americans through his extraordinary communication skills (especially compared to Carter’s), honed by his years as a Hollywood actor and leader of the nation’s most populous state.

Most Memorable Campaign Moment: At the end of the only debate between Carter and Reagan, held on Oct. 28, 1980, the challenger looked straight into the television camera and asked, “Are you better off now than you were four years ago?” Since then, that question has been raised in nearly all presidential campaigns by both parties.

Carter was perceived as reluctant leader, poor communicator, and generally not up to the demands of the job. Forty years later, Trump views himself as strong, tough, and decisive at home and abroad. But there is a YUGE gap between Trump’s perception and that of many voters, which must be bridged if he is to be reelected in this time of grave national crises.

Why Bush Lost:  First, a now-iconic campaign slogan, “It’s the economy, stupid,” was brilliantly hatched and executed by Clinton’s team. The economy was in recession through much of 1992, and Clinton’s message discipline was solid.

Second, Bush’s defeat could be couched as “passing the torch to a new generation.” (A classic phrase from President John F. Kennedy’s 1961 inaugural address.) Clinton was a charismatic Arkansas governor who, at age 46, was the first baby boomer to be nominated by a major party.

Third, Clinton out-campaigned and out-maneuvered President Bush, who had successfully led the nation through the Persian Gulf War. Team Clinton created and implemented “rapid response” messaging along with a “war room.” They hammered the perception that the president was out of touch with the times, including pop culture. But Clinton was “hip,” and when he played the saxophone on “The Arsenio Hall Show,” presidential campaigns were changed forever.

Fourth is the most contested factor that might explain Bush’s defeat — Ross Perot’s role as the third-party candidate. But the enduring question is to what degree, since Perot won nearly 19% of the popular vote. Upon Perot’s death last year, RealClearPolitics elections analyst Sean Trende revisited this quandary in a piece headlined “We Don’t Know Whether Perot Cost Bush in 1992.”

Most Memorable Campaign Moment: In truth, there were few memorable moments from that campaign, but one brief gesture by the incumbent forever enshrined itself in presidential debate history. Here is a U.S. News & World Report headline: “George H.W. Bush Checks His Watch During Debate With Bill Clinton and Ross Perot.” The subhead: “Where Bush appeared impatient, ‘Clinton steps in and empathizes, empathizes, empathizes.’ “

That innocent wristwatch glance crystallized the perception that President Bush’s time was up.

Don’t be outmaneuvered on the campaign “trail,” which is even more challenging this year with no physical “trail.”

Have a clear, concise pitch and institute “message discipline.”

Feel the pain of your people. Bill Clinton mastered that act with Bush perceived as being less empathic to the struggles of average Americans. Trump is plagued with a similar problem as the entire nation struggles to deal with the coronavirus and crippled economy.

Overall Lessons for Trump From the Last Three One-Term Presidents

If the election verdict is “time to move on,” be graceful and accept the will of the people.  A hallmark of our nation is its smooth transition of power.

But if defeated, look forward to “doing good” as an ex-president. Americans have a remarkably strong and consistent record of liking their ex-presidents (reelected or not) more than when they were in the Oval Office.

And please never again say, “It’ll end up being a rigged election” or “I should get a third term.” Both statements practically guarantee that Jimmy Carter will personally welcome you to his lonely, exclusive club where he is the only living member.