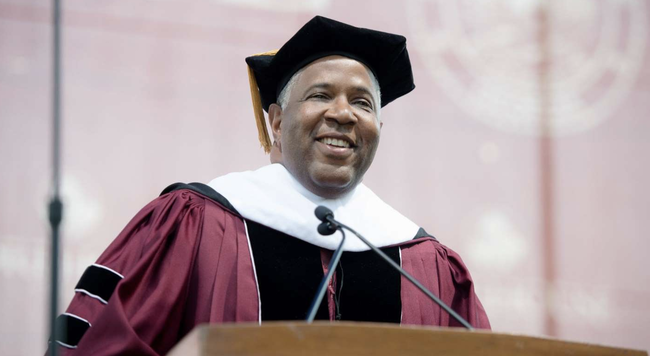 
Black billionaire Robert Smith who, along with Floyd Mayweather and Tyler Perry, paid for George Floyd’s extravagant funeral, and who – most famously – once promised to pay off the student loans for an entire class of Morehouse College students at the close of his speech, is fighting a criminal tax inquiry, Bloomberg reports.

The story of the actual fraud is somewhat opaque – not unlike the deed itself, which allegedly saw assets flow through various offshore entities connected to Smith and another businessman who was one of Smith’s early mentors, Robert Brockman (the man who gave Smith some of the early investor capital he used to power). In 2000, Brockman contributed to the $1 billion Smith used to launch his San Francisco-based Vista Partners, a private equity firm.

According to Bloomberg, Smith is trying to convince the DoJ to forgo any criminal charges and instead settle the matter civilly. Given the current climate, the IRS pursuing one of America’s only black billionaires wouldn’t be a great look for the federal government, and the DoJ might have a hard time convincing a jury, especially considering the confusing nature of the investigation, which involves tracing $200 million in assets through a web of offshore entities before they can even establish whether Smith was indeed the beneficial owner of these assets.

Justice Department to forgo criminal charges and resolve his case with a civil settlement, according to three of the people. A conviction could send him to prison and force him out of Vista Equity Partners, a money management firm with $65 billion in assets that has brought him fame and a luxe lifestyle.

Part of his defense rests on a reported pledge by the private equity fund to direct proceeds to charity. If prosecutors determine that the proceeds were designated for charity all along, it could bolster the argument that Smith was never the beneficial owner and not liable for taxes.

Interestingly enough, Bloomberg’s sources claim Smith has talked to prosecutors about the possibility of cooperating in exchange for leniency. Similar to the allegations against Steve Bannon, Smith appears to be only a secondary suspect – and it’s possible that the investigation into Smith was only brought about to pressure him to cooperate.

Whatever the case may be, it’s early days.

The Justice Department has discretion in deciding whom to charge, weighing factors such as the prosecution’s evidence, the strength of the defense and the way a jury would likely respond to the facts. Smith, a prominent Black businessman and philanthropist, may be viewed sympathetically by a jury in a time of protests for racial justice, lawyers said.

“The issue of jury appeal is often considered by prosecutors in cases that are a close call,” said David S. Weinstein, a former federal prosecutor in Miami who isn’t involved in the case. “If 12 jurors believe they want to acquit a defendant based on something other than the evidence, that’s their inherent right. They may believe it’s not the right time or place to bring a case against a particular defendant.”

Smith pledged $34 million to pay off the student loans of an entire Morehouse College class last year, a dedication that earned him a place among Bloomberg’s ’50 People Who Defined 2019″.

But given the nature of the allegations against him, after reading the Bloomberg story, it’s worth wondering: Would Bloomberg’s reporters have been this forgiving if the person at the center of the investigation was anybody but the black billionaire who became a folk hero by paying off a whole class of students’ loans?