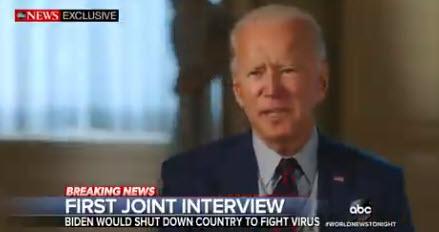 
Throughout the Democratic National Convention there was a common, if contradictory, theme: on one hand, the Democrats bashed Trump for his response to the covid pandemic while at the same time they lamented the dismal state of the economy, where millions have lost their jobs and countless corporations have gone bankrupt. Well, which one is it, because you can’t have both: if Trump had enacted a more forceful response to the pandemic, the US economy would have been shut down for longer (as Neel Kashkari now urges, seeking another 6 weeks of shutdowns and setting the stage for the next crisis); alternatively the economy would be firing on all cylinders but the fallout from covid would be much more widespread.

On Friday afternoon, in an exclusive interview with ABC “World News Tonight”, Biden revealed on which side of the fence he is saying that as president, he would shut the country down to stop the spread of COVID-19 if the move was recommended to him by scientists.

“I would shut it down; I would listen to the scientists,” Biden told Muir Friday, alongside his running mate, Kamala Harris, during their first joint interview since officially becoming the Democratic Party’s presidential and vice presidential nominees.

“I would shut it down. I would listen to the scientists.”

Joe Biden tells @DavidMuir in an exclusive interview that as president, he would shut the country down to stop the spread of COVID-19 if the move was recommended by scientists. https://t.co/2A9r07d7EC pic.twitter.com/Ib99cshlSI

Biden also criticized what he argued is the “fundamental flaw” of the Trump administration’s response to the coronavirus pandemic, that the nation cannot begin to recover economically until the virus and public health emergency is under control, which is strange considering that in isolated cases such as Sweden which did not succumb to the media panic and did not enforce a uniform shutdown – while at the same time not forcing the population to take draconian measures to limit the spread of covid – the economy hit was far less than most of its European counterparts, while the Covid breakout has almost completely faded.

“I will be prepared to do whatever it takes to save lives because we cannot get the country moving, until we control the virus,” Biden added. “That is the fundamental flaw of this administration’s thinking to begin with. In order to keep the country running and moving and the economy growing, and people employed, you have to fix the virus, you have to deal with the virus.”

Biden’s statement brings up one immediate question: which scientists would he listen to? The WHO which, under heavy influence from China, pretended for well over a month that covid was innocuous as the following Feb 23 soundbite from WHO Director Tedros Ghebreyesus confirms:

I have spoken consistently about the need for facts, not fear. Using the word pandemic now does not fit the facts, but it may certainly cause fear. This is not the time to focus on what word we use. That will not prevent a single infection today or save a single life today.

… and only on March 11 – just days before the US announced economic shutdowns – declared the coronavirus outbreak a pandemic (apparently succumbing to “causing fear”). Or perhaps Biden should have listened to scientists like the US Surgeon General Jerome Adams, who on February 29 tweeted “Seriously people- STOP BUYING MASKS! They are NOT effective in preventing general public from catching #Coronavirus.”

They are NOT effective in preventing general public from catching #Coronavirus, but if healthcare providers can’t get them to care for sick patients, it puts them and our communities at risk!
https://t.co/UxZRwxxKL9

Or perhaps he meant listening to scientists like Anthony Fauci who on June 12 said “we know that you don’t need an N95 [mask] if you’re an ordinary person in the street” adding that “masks are not 100% protective.” When confronted with this contradiction in the government’s public-health advice, Fauci said “actually the circumstances have changed,” he said. “That’s the reason why.”

So will Biden shutdown the entire economy, leading to tens of millions more in job losses, just because it is the prevailing opinion circumstance at the time that he should do so?

Or perhaps what Biden meant to say is that as a leader it is his job to weigh costs and benefits of all policy options, as the catastrophic consequences of another economic shutdown could and likely would outweigh the benefits from a draconian response to a disease which as we showed recently has led to virtually no outsized under-40 fatalities, and yet as Jim Reid said in July, it is the “younger people will be suffering most from the economic impact of Covid-19 for many years to come, we wonder how history will judge the global response.”

We wonder too, especially now that we know that if there is another wave of covid in the US – whether domestic, or imported from China again or some other country – the US will have another full-blown economic shutdown, just as Minneapolis Fed president Neel Kashkari has been urging (we also know who Fed chair would be in a Biden administration).

One final point about science, best laid out on twitter, is that “Science is NOT a magic wand. Especially “science” as it’s practiced today. Bureaucratic science is ALL about consensus. What gets funded is political. What gets published is political.”