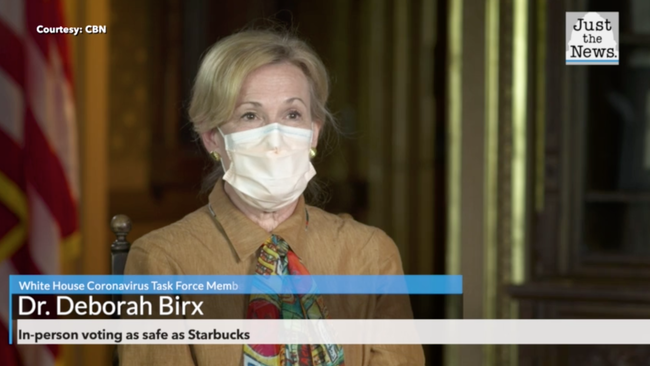 
“If you go into Starbucks in the middle of Texas and Alabama and Mississippi that have very high case rates, then I can’t say that it would be different waiting in line in the polls,” Dr. Deborah Birx, a key member of President Trump’s coronavirus task force, told CBN News’ David Brody.

During the interview, Birx said she’s traveled across Sun Belt states to visit as many Starbucks coffee shops as she could find, which was an attempt to see if average Americans were wearing masks and socially distancing. Her experiences at the coffee shops, in states with high COVID-19 cases and deaths, led her to believe the country is more than ready to go to polls in November.

“Well, I can tell you it has been safe for me to go to Starbucks and pick up my order,” Birx told Brody, advising masks and social distancing measures would need to be enforced at polling stations.

Birx, who has served under both Republican and Democratic administrations for decades, discussed several topics, including vaccines and a timetable, to return the country to normal.

She expects the results of COVID-19 vaccine testing this fall, adding that “vaccines are being manufactured and that’s going well.”

There have been discussions about which Americans, likely the most vulnerable, receive the vaccine first, she said.

“Certainly, we would want to vaccinate those that we know are at the highest risk; individuals in nursing homes, those with multiple co-morbidities, having both hypertension, diabetes and a weight issue,” she explained. “Those are individuals independent of age that we would like to see vaccinated.”

Birx said she remains focused on preparing the country for the flu season, in the coming months, advising Americans to get their flu shot this fall.

When Brody questioned the increasing concerns around vaccination will be required for future  air travel and attending sporting events, she laughed and said:

“Well, that’s an interesting suggestion… I’m going to take that back. Thank you for making it…I hadn’t heard that. No one has asked me that question. I think that’s really a very important question.”

The interview comes as President Trump accuses Democrats of ‘trying to steal the election’ through the facilitation of mass mail-in balloting.

“They are talking about sending 51 million ballots out to anybody who, you know, nobody knows who is going to get them,” the president told Fox News’ Sean Hannity last week. “It’s a horrible thing. It’s a fraudulent election. Everybody knows it, you don’t even have to know politics to know it.”

While Democrats push for mail-in balloting and the Trump administration assures the country that in-person voting is safe, the pre-election chaos in Washington between both political parties certainly suggests, whoever wins in November, the other political party will certainly challenge the results.