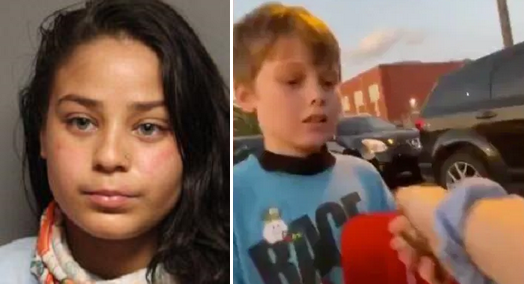 21-year-old Olivia M. Winslow of Wilmington was arrested on Friday in connection with the incident involving the 7-year-old boy who had his MAGA hat stolen, according to WDEL.

Video circulated on social media, by Students for Trump, shows two girls, one police said was Winslow, tearing up Trump signs and stealing the young boy’s “Make America Great Again” hat. The video shows the boy crying, and his mother encouraging him to get his hat back.

Police said they arrested Winslow after reviewing video footage of the event. A second woman involved hasn’t yet been arrested. –WDEL

40K RTs
4.5 million views.
Because of you and your support the monster who did this to 7 year-old Riley has been arrested and charged.
This should ruin her life.
It’s a hate crime.
Let it be a serious warning to all you hate-filled Joe Biden voters.
We’re not taking it any longer https://t.co/PjAcmi872R

Update: Turning Point USA’s Benny Johnson shared on Twitter that “Riley got a call from the White House” Friday, posting some pictures of the young boy, one taken at what appeared to be a Trump rally.

It looks like Riley will be getting a very special replacement hat… pic.twitter.com/GPIbjAJ04Z

A video from outside of last night’s DNC Convention in Milwaukee shows two Joe Biden supporters stealing a MAGA hat from a 7-year-old boy before physically attacking his mother.

The mother Abbey and her son Riley were waiting for a table at a restaurant across the road from the Wisconsin Center when they were approached by two female Biden supporters.

The clip shows the two women tearing up signs belonging to Abbey as they admit they are destroying her property but “don’t give a fuck.”

One of the women then steals a red MAGA hat from the 7-year-old boy before throwing it to her friend.

Moments ago outside of the DNC convention, Joe Biden supporters attacked a 7 year-old boy.

He was attacked simply because he wore a @realDonaldTrump hat.

His name is Riley.
Watch it happen.
Listen to him cry.

Will Joe condemn this violence against Children?

The boy then comes running up to the other women telling her, “That’s somebody else’s hat!” before she swipes it away from him again.

The boy begins to cry as one of the Biden supporters responds, “We don’t give a fuck, your mom likes Trump.”

The boy then tries to retrieve the hat as one of the women aims a kick which almost hits him.

Here are photos of the victims.

Mother, Abbey and her son Riley.

They were just waiting for a table at a restaurant across from the DNC convention when the attack happened.

If Joe Biden supporters will do this to children — what will they do you you?

The mother’s male partner or friend then tries to get the hat back, but the Biden supporter tries to punch him in the face.

The Biden supporter then throws the hat over a fence as the confrontation ends with a deluge of expletives as one of them Biden supporters screams “we will knock you the fuck out!” as the other once again tries to physically attack the mother.

The mother has filed an assault report with the Wilmington Delaware Police.