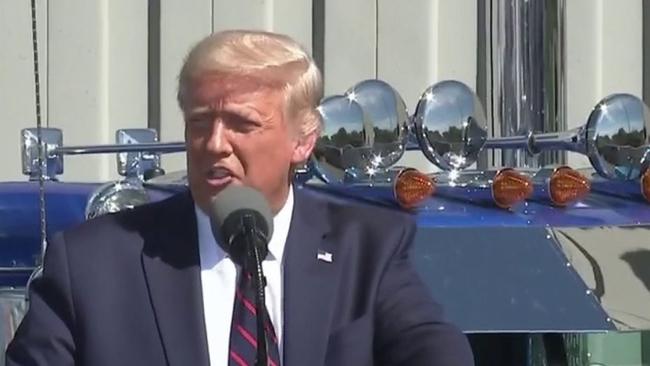 We are now entering US election campaign season proper. Up until now there has been talk of 3 November but not so much market focus on it. Expect that to change. Given we live in hyper-partisan times where offence is taken at the drop of a hat, anything but the most anodyne of coverage by objective analysts, or the most partisan by journalists on both sides, is going to be tricky. (On the latter note, Bloomberg today has an Op-ed from Mike Bloomberg ‘Don’t Rehire a Failed President’, which begins “I’ve never been much for partisan politics.” Didn’t Mr Bloomberg just run for president against the incumbent as a Democrat, and has his name not been bandied around as a potential Treasury Secretary in the political equivalent of Fantasy Football?) Nonetheless, given what market swings and geopolitical shifts we saw after the surprise of November 2016, it is something we have to at least try to do.

Joe Biden is now officially the Democratic nominee after giving a pre-recorded speech last night to accept. Market-wise, it was free of policy details but filled with words like “hope”, “light”, and “love”, as well a clear attempt to be bi-partisan; that as a series of George W Bush-era Republican neoconservatives endorsed Biden. There was one allusion to FDR, which obviously brings the fiscal “New Deal” to mind. Yet beforehand there was a social media kerfuffle when the leader of Biden’s transition team stated “When we get in, the pantry is going to be bare. When you see what Trump’s done to the deficit…forget about Covid-19, all the deficits that he built, with the incredible tax cuts. So we’re going to be limited.” That sounds like fiscal contraction rather than expansion (something that will matter to the USD and the global economy hugely). Progressive Democratic Twitter was very quick to show strong disagreement: and the Biden campaign stressed it does still have expansive fiscal plans, to be balanced with top-end tax increases.

Meanwhile, President Trump gave a campaign rally in Joe Biden’s home town of Scranton shortly after news broke that his 2016 campaign manager Steve Bannon had been arrested for fraud. Having watched it (along with the Biden speech), what needs to be underlined was the shift in tone and rhetoric. This was 2016 populist, Bannon-era Trump rather than the staid version recently offering up capital gains tax cuts and talking the stock market, focusing instead on NAFTA, China and US jobs, the Paris Climate Accords, elite abandonment of the working class, immigration, bathroom faucet water pressure, and how he dislikes sharks. Trump also insisted that opinion polls continue to be slanted against him by their composition, and that where he is behind by 4 “we are actually ahead by 6”. Separately, a Rasmussen survey has him at 51% approval among likely voters vs. 48% who disapprove, with strong approval at 38% and strong disapproval at 41%, so a net of -3%. That is up from -16% at the end of May and is actually close to the highest levels of his presidency.

In short, this still looks a very open race in very unusual circumstances rather than the done deal that polls and pundits seemed to be showing until recently. It won’t be a campaign one can assume the outcome of so easily: keep your eye on the ball.

Meanwhile, the international arena will obviously be watching the US election campaign closely.

The Middle East must do, with its new UAE-Israel peace deal and tentative signs of even Saudi-Israeli peace – and as a further US call for UN snapback of sanctions against Iran for breaking the 2015 nuclear deal is rejected. The US had already walked away from the deal, but it interprets the UN Security Council resolution introducing sanctions and the snapback provision as legally valid until it is replaced by a subsequent one, and that it can still ‘snapback’ as an original signatory. Europe, Russia, and China disagree – but the US says it is going to proceed anyway and that 30 days from now, all Iran sanctions will be reimposed. The arms embargo in October then becomes a major issue too. This is one thing that may change after November, but which is likely to cause sparks before then.

Also following the election campaign will be Europe, which is offering milquetoast protests against what is happening in Belorussia; in Russia, as Alexander Navalny is poisoned; over Turkish energy drilling in Greek waters; and about where the US posts its troops inside the EU – and still talking about the need for dialogue with Moscow and Ankara and Tehran and the US.

China will also be watching the US election closely, especially as it is going to be playing a starring role in terms of Trump rhetoric and action. The phase one trade deal review is now apparently going to happen soon after all, after having given Beijing time to catch up on purchases; and speaking of how transactional a world we live in aside from who sits in the White House, the Wall Street Journal alleges China is telling countries they can have access to the Covid-19 vaccine it is working on – provided they recognise its claims to the South China Sea. The implications of that for public health and international relations (and, more gradually, trade relations) are potentially enormous.

The same is true for a Pakistani minister telling the press it will use nuclear weapons against India if pushed (which is an issue increasingly tied to India-China relations): is this peak 2020 yet? Perhaps not.

I started by saying that the market will start to focus on the election and all the implications thereof – but the fact that the USD is still selling off suggests we haven’t got there yet.

Data-wise, the provisional Aussie August manufacturing PMI was 53.9 this morning and services back to 48.1 from 58.2 – that’s what a new lockdown looks like in a services economy.

Japanese CPI was 0.3% y/y and flat y/y excluding food. No inflation for you, BOJ. The Japanese August manufacturing PMI was 46.6, so still sluggish, while services were 45.0, down from 45.4. SO deflation, perhaps?

UK public-sector finances were slightly better than expected but still ugly at GBP25.9bn, while retail sales were up 2.0% m/m ex petrol vs. 0.2% expected. People are bored, and people are shopping online, it seems. I guess if you can’t go on holiday, why not? It’s either that or watch the US election campaign.