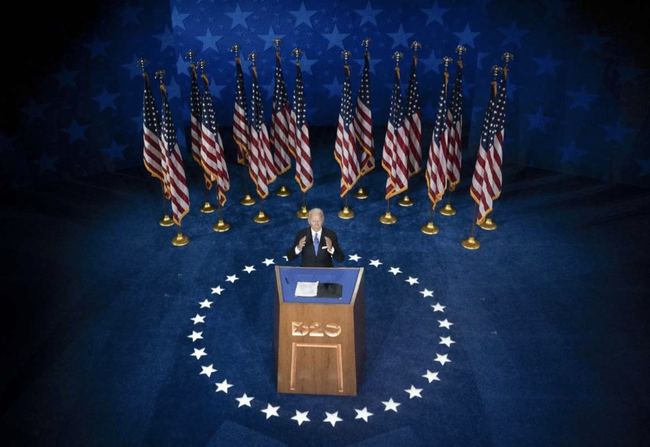 
It was very much the speech that Joe Biden has been preparing for his entire life. After half a century as one of Washington’s most supremely polished politicians, Biden humbly accepted the nomination of his party during a 25-minute speech comprised of cliches and rhetoric recycled from all the Democrats who spoke before him during what has been, judging by the ratings, a supremely boring stretch of prime time programming.

There were no surprises in Biden’s speech. Rather, the most surprising thing, perhaps, was the fact that he was able to stand up and deliver it with a minimal number of flubs. Say what you will about the man, but on Thursday night, his teleprompter-reading skills were on point.

He started by asking Americans to embrace the “Path of hope and light” (the Democrats) over the “Path of darkness” (Trump and his Republican “enablers”) – though throughout the entire speech he never once mentioned Trump by name, referring to him only as “our president” or “our current president”.

“May history be able to say that the end of this chapter of American darkness began here tonight,” Biden said.

“I will be an ally of the light, not the darkness.”

He then evoked an image of American chaos and disorder that, if it had come from Trump, would have been castigated by the MSM as another piece of bombastic fearmongering from a president who rode to power on a wave of “racial hysteria”.

But unlike Trump’s predecessor, President Obama – a president whom “our children could look up to”, Biden said – Trump feeds off of creating division, and beyond that, failed in his duty to “protect” all Americans.

The coronavirus loomed large in Biden’s speech, as he rattled off a list of COVID-19 stats and insisted that Trump is responsible for “the worst outbreak of any country on earth”. Businesses are closing, people are dying, and all the while, the rich are getting richer, Biden said. All of this is Trump’s fault (actually, blame for that last bit should rest with the Fed), before attacking Trump’s tax cuts and his efforts to gut the ACA and Medicaid. He even claimed the current president is threatening “the sacred promise” of Social Security by cutting a vital revenue stream.

“If I’m your president, we’re going to protect social security and medicare, you have my word,” Biden said.

As far as COVID-19 goes, President Trump “doesn’t have a plan”, having committed the “unforgivable” sin of “failing to protect [Americans]”, Biden insists that he very much does, and then rattles off a list of talking points stolen from Trump, before throwing in his national mandatory mask mandate, as if this “patriotic duty” is capable of single-handedly extinguishing COVID-19.

Aside from that, Biden’s only real promise is to move supply chains for essential medical supplies and equipment to the US, a Trump talking point that Biden and other globalists dismissed – like they dismissed the trade war – before they quietly came around.

Biden drew on his strengths as a “retail” politician when he briefly ventured onto the subject of loss, from losing his first wife, to losing his son Beau, before offering some kind words about his wife, Jill, “an educator” and a “wife and mom – a military mom”.

Biden talked about the “black hole that opens up in your heart” when a loved one is lost. These were undoubtedly the most humanizing stretches of a speech that was otherwise a heady brew of platitudes, boilerplate and sanctimony.

Of course, Biden wasn’t the only speaker of the night.

In keeping with the unconventional nature of this year’s convention, it’s likely the first in modern American political history to prominently feature both an avowed socialist and a billionaire. Enter Mike Bloomberg, whose speech was about as rousing and confidence-inspiring as that debate performance.

Just think, one slip up (like, if Biden had literally taken a hard fall or something) and maybe the former Veep would be introducing Bloomberg…

And with that, the Democrats’ “Virtual Convention” is finally over.

Now the spotlight shifts back to Trump, who will accept his party’s nomination for the second time during a headlining spot at the Republican National Convention, which begins tonight in Charlotte. Unlike the Dems, the Republicans still plan on hosting some in-person business, and attendees will need to wear masks and social distance. Republicans in Charlotte will also don Bluetooth badges that allow for tracking and contact tracing.