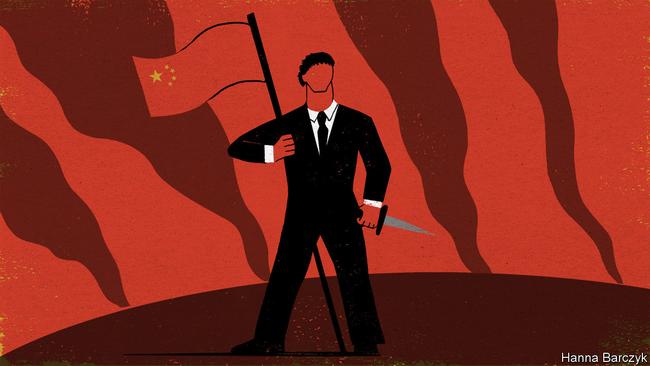 
Authored by Huidong Zhang via The Epoch Times,

Top-level Chinese officials have recently shifted away from the regime’s wolf warrior diplomacy tactic to a more toned-down approach. This turnaround can be interpreted as the Chinese Communist Party (CCP) not wanting to decouple from the United States nor shut out of the global economic order led by Washington.

Yang Jiechi, a top member of the Politburo, wrote, “China is always open to dialogue and communication with the U.S.,” in an article dated Aug. 7. Cui Tiankai, Chinese ambassador to the United States, said the U.S.-China relationship should be “cooperation rather than confrontation” at the Aspen Security Forum on Aug. 4. Foreign Minister Wang Yi addressed the China-U.S. Think Tanks Media Forum on July 9, saying, “China can restore and restart the dialogue mechanisms at all levels and in all areas.”

Although the above statements from the CCP officials reveal that Beijing is begging for a dialogue with Washington, the words carry no weight and may not lead to concrete actions.

For a long time, the CCP has regarded diplomacy to be a way of extending its tyranny. Its aggressive and offensive diplomacy is characterized by the goal of inciting national sentiment and brainwashing the Chinese people.

For example, as former leader of the Communist Party, Mao Zedong’s revolutionary diplomacy was in line with his personal ambition—to become a leader of the world revolution. He classified nearly all nations as enemies. The United States and Western Europe became “imperialists,” the communist countries that abided by the Soviet Union were the “social imperialists,” and the remaining third world countries basically close to Europe and the United States were the “anti-China” faction. The few countries left were the “widespread poor friends” in Africa, which the regime could exploit using its foreign aid policy.

In the 1969 Sino-Soviet border conflict, a very annoyed Soviet Union was preparing to carry out a “surgical nuclear strike” against China. A firm opposition from the United States spared the Chinese people from nuclear attack. Under the provocative “anti-imperialist” and “anti-revisionist” foreign policy of the regime, the Chinese people have suffered endlessly from an arrogant and isolated dictatorship.

The subsequent leaders of the CCP realized that the time wasn’t right for the CCP to become a world leader; so they adopted former leader Deng Xiaoping’s “economic foreign policy with a strong nationalist diplomacy” to confuse the international community. During this period, the CCP organized various demonstrations in mainland China to threaten the international community, such as the 1999 students’ anti-American demonstration, the Chinese internet users’ boycott of French retail giant Carrefour in 2008, the 2012 anti-Japanese protest, and the anti-Korea demonstration in 2017. The wolf warrior diplomats, however, remained quiet.

China’s economy developed rapidly after the United States helped it join the World Trade Organization (WTO). Its national strength also increased significantly, especially after it surpassed Japan to become the world’s second largest economy in 2010. Its capital strength seemed to prepare the CCP to achieve its ambition of changing the world order so it dominated the world. CCP hack writer Jin Canrong, a professor on Sino-U.S. relations at Renmin University of China, even declared the so-called “win-win” as China wins twice. The new superpower is now ready to launch its revolutionary diplomatic wars around the world.

The global pandemic enabled the wolf warrior diplomats to launch a series of attacks in order to shirk accountability for the wide spread of the CCP virus, commonly known as the novel coronavirus. First, they inferred that the United States was the source of COVID-19, which provoked the China-U.S. conflict. Second, shamelessly demanding gratitude from the world for providing defective face masks. Third, the Chinese ambassador to Australia warned Australia to stop the international inquiry into the origin of the CCP virus. Fourth, the Chinese ambassador to Paris slandered staff in France’s nursing homes on his embassy’s website and sharply criticized the Western response to the outbreak for being laggardly. Fifth, the Chinese Embassy in Brazil tweeted that Eduardo Bolsonaro, the son of the President of Brazil, had been infected with a “mental virus” during a recent trip to the United States after he tweeted that the regime is a “dictatorship.” Sixth, the Chinese Embassy in Germany called local tabloid BILD “bad” when it claimed that China owes a debt to Germany because of the CCP virus pandemic. Seventh, the Chinese Embassy in Sweden posted on its website that think tank Frivärld’s claim that “China should apologize” is totally groundless, unjustified, and is a more terrifying virus.

These diplomatic spats caused by the wolf warriors on the surface demonstrate the tough line of the regime, but also constantly brainwash the Chinese people. As the state-run media Global Times wrote, “The days of China getting bullied are gone.” The ultimate goal of such tactics is to trap the international community into the blame game and obfuscate the fundamental issue of the source of pandemic.

However, this wolf warrior diplomacy has brought an obvious side effect, namely, “the big power diplomacy with Chinese characteristics” proposed by CCP leader Xi Jinping has deteriorated to distrust by all countries in the world, and to once again becoming the “human enemy.” A recent Pew Research Center survey showed “roughly two-thirds of Americans now have a negative opinion of China, the highest percentage recorded” since Pew began asking the question 15 years ago.

Wolf warrior diplomacy has not only failed to elevate international power proposed by China’s foreign ministry, it has ruined the image of a worldly new power the CCP created through painstaking efforts.

The relationship between the CCP and other countries in the world continues to deteriorate—especially U.S.-China relations. After U.S. Secretary of State Mike Pompeo stated that the freedom-loving nations of the world “must start by changing how our people and our partners perceive the Chinese Communist Party,” and (we) “can’t treat this incarnation of China as a normal country, just like any other,” the regime finally realized the change in U.S. foreign policy toward the CCP. In order to maintain the legitimacy of the regime, the CCP top officials had to beg for a dialogue with the United States.

Yang Jiechi, a Politburo member and director of the Office of Foreign Affairs of the Communist Party of China wrote:

Obviously, Yang deliberately forgot what Pompeo said in his speech, “Yang’s promises, like so many the CCP made before him, were empty.” The dialogue will not occur because the United States has recognized, as Pompeo stated, “that the only way—the only way to truly change communist China is to act not on the basis of what Chinese leaders say, but how they behave.”

The United States has said it clearly:

“When it comes to the CCP … we must distrust and verify.”

The CCP’s begging for a dialogue with the United States can be interpreted as a delaying tactic and pinning its hopes on the upcoming presidential election.

“China prefers that President Trump—whom Beijing sees as unpredictable—does not win reelection,” according to a statement made by NCSC (U.S. National Counterintelligence and Security Center) Director William Evanina on Aug. 7.

The CCP has never given up its ambitions of global hegemony. Therefore, the United States must be alert to the current behavior of the CCP, because what the CCP does has always threatened the security of the United States and the world.

As we all know, from the cover-up of the coronavirus outbreak to the suppression of whistleblowers, the CCP’s actions, aided by the WHO director general’s misleading information, have led to a world pandemic that continues to erode the international community. It is inevitable for people around the world to demand compensation from the CCP for damages caused by the virus. Already, some countries in Africa have publicly asked the CCP to reduce or forgive their debts—this is compensation in disguise. Conflicts around the issue of claims will erupt after the pandemic is over. The CCP may have to leave the international economic order.

Countries will not move their industrial supply chains to China, especially after seeing the threat of the CCP’s tyranny to the global economy and politics. Considering national security and the safety of people’s lives and health, countries will accelerate their decoupling with the regime. A tidal wave of decoupling from the CCP has already begun.

Countries involved in cooperation projects and organizations led by the CCP’s investment-oriented “One Belt, One Road” (OBOR, also known as Belt and Road Initiative), Shanghai Cooperation Organization, and the BRICS, have had serious conflicts and disagreements with the CCP over the pandemic and diplomacy. India and Brazil, members of the BRICS, for instance, have shown deteriorating relations with the CCP.

Through the pandemic, deterioration of relations between the CCP and other countries has accelerated. Once the industrial chain moves out of China, it will be difficult to get it back. The status of “world factory” will never return. The CCP’s perverse actions will only lead to its exclusion from the international community and the world economic order.